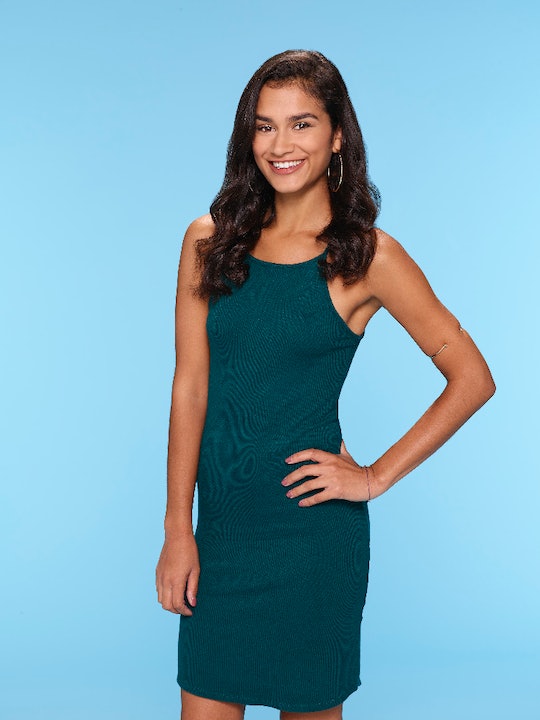 I think it goes without saying that Bachelor Season 21 contestant Taylor Nolan hasn't gotten nearly as much screen time as some of the other more outlandish contestants (like Alexis "Shark-Dolphin Girl" Waters and Corinne Olympios) and obvious frontrunners (like Vanessa "Mrs. Nick Viall" Grimaldi), but that seems about to change. On the Jan. 23 episode, Taylor and Corinne's growing mutual dislike of one another morphed into a full-blown feud. Week 4's cliffhanger featured the two women practically screaming at one another via fireside. Unlike Corinne — who we arguably know too much about — the show has focused far less on Taylor. For instance, what is Taylor's job?

At 23-years-old, Taylor (along with Alexis) is among the youngest of any of the 15 contestants remaining in this season's quest for Nick's heart. But despite her young age, the Seattle native has accomplished a lot professionally in only a short amount of time. As is indicated in her Bachelor chyron, Taylor is a mental health counselor. Taylor has also mentioned a bit about her educational background and her career to Nick during her brief one-on-one time with him during group dates and at the cocktail parties, including that she feels more of a mental connection with Nick.

Taylor's educational background is just as advanced as her career. According to her social media accounts and her LinkedIn profile, she earned a Bachelor of Science degree in Psychology from Stevenson University in 2014 and a Master of Science degree in Mental Health Counseling from Johns Hopkins University after that, in 2016. She's also certified as a "QPR Suicide Prevention Gatekeeper," as of 2012.

During her time at Johns Hopkins, Taylor apparently also belonged to Chi Sigma Iota, an "international honor society of professional counseling and for professional counselors" established in 1985. At Stevenson, she made the Dean's list and belonged to Psi Chi International Honors Society. Clearly, Taylor's got plenty of those "book smarts" she was talking to Corinne about in the latest episode, when she was attempting to explain the difference between various "types" of intelligence.

The only work experience listed for Taylor on LinkedIn is the six months she spent, post-undergrad, working as a counselor at Key Point Health Services from May 2014-October 2014 (at which point, presumably, she returned to school for her Master's degree). Since she only graduated this past May, it's possible that she hadn't yet gotten a job at the time — The Bachelor began filming sometime in September.

Taylor's career path makes a ton of sense, given how much time she's spent psycho-analyzing Corinne — much to Corinne's chagrin. Fingers crossed that they'll be able to defuse the tension between them before it gets too ugly.