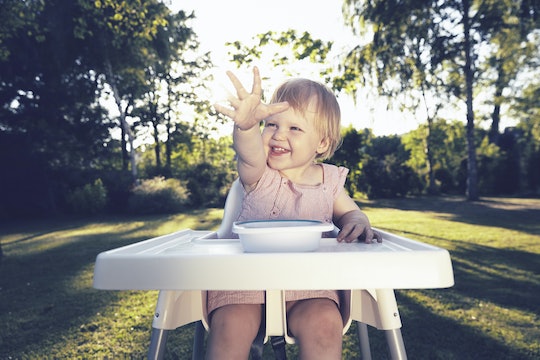 What To Know About The 18-Month Sleep Regression

By the time your baby is 18-months-old, you're probably familiar with sleep regressions — the ultimate kick-in-the face to parents. The baby you've been quietly smug about when your friends complained about their bad sleepers, all of a suddenly and without explanation, turns into "one of them" (i.e. up all night or refusing to nap during the day). The 18-month sleep regression, however, is one of the worst. So, just what is the 18-month sleep regression? More importantly, how in the ever-loving you-know-what will you be able to get through it?

According to The Baby Sleep Site, sleep regressions — which the site defines as "a period of time (anywhere from 1 – 4 weeks) when a baby or toddler who has been sleeping well suddenly starts waking at night, and/or skipping naps (or waking early from naps) for no apparent reason" — tend to happen around major changes in baby's development (such as growth spurts or teething or crawling). Since the 18-month mark ushers in some big milestones for baby's physical development and emotional development, The Baby Sleep Site notes, it makes sense that there would be a shift in a baby's sleep as a result of all that change.

On the physical side of things, as Baby Center points out, 18-month-olds are starting to move a lot more confidently, starting to climb, and can even start throwing balls. According to What To Expect, toddlers experiencing sleep disruptions might also be up against that old culprit called "teething" as those canines and some molars start to push their way out.

On an emotional level, 18-month-olds are learning independence. In fact, as The Baby Sleep Site notes, they begin to appreciate the fine art of being defiant. These newfound skills of willfulness can lead to more intense bedtime battles, and, as The Baby Sleep Site adds, are that special "something" that makes this particular regression so difficult.

Toddlers at this age are also getting better at seeing themselves as separate from their parents. According to infant researcher Daniel Stern, as cited in Psychology Today, it is at 18 months when children begin to show evidence of self-awareness. This can be a double edged sword, because while a toddler can see you as separate from them, they can now feel uncomfortable or sad when they are not near you. This can also lead for near-impossible going to bed, or going back to bed, sagas.

There's also the possibility that a sleep regression means your toddler is ready for a change in their nap schedule. As cited in Parents.com, Dr. Harvey Karp (author of The Happiest Baby Guide to Great Sleep) says that, "Children usually go from two naps to one sometime between ages 1 and 2."

As with all the sleep regressions you've dealt with before, there's really nothing you can do but ride the wave and wait it out. Some tips to survive sleep regression, offered up by The Baby Sleep Site, include offering your kid extra naps and introducing an earlier bedtime, a nightlight, a lovey, or a bedtime snack.

Signs to look for that you might have hit the 18-month-sleep-regression, also outlined by The Baby Sleep Site, include increased fussiness and crying, appetite change, and increased clinginess. But you may not need any of these to inform you. Likely, your own puffy, dry eyes, and those ever-growing under-eye bags underneath them, will be sign enough.