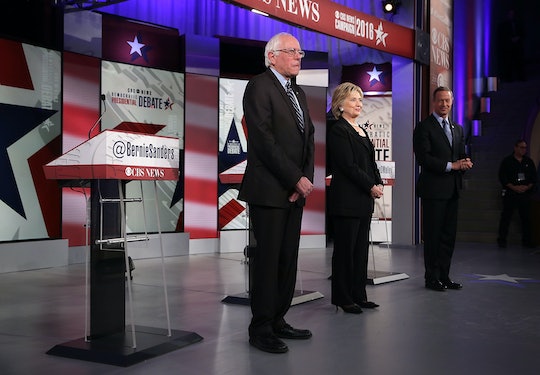 What Is The ABC Democratic Debate Topic? There's One Issue That's Bound To Come Up

The stage — and the viewing audience — of ABC's Democratic debate might be much smaller than the GOP debates', but there's no diminishing the importance of Saturday night. Hillary Clinton, Bernie Sanders, and Martin O'Malley will face off at Saint Anselm College in New Hampshire Saturday night for the third Democratic presidential debate, hosted by ABC News. And though there's no specific topic for ABC's Democratic debate, there's one subject that will most definitely be approached — and it's one that's weighing heavily on the minds of most Americans.

Between the Paris attacks and San Bernardino shootings, it would be impossible for the discussion not to touch on terrorism and national security. It has been a focal point for the Republican debates on several occasions, and each Democratic hopeful has a different take on the charged topic, so it will be interesting to see how Saturday night unfolds.

Not only should we expect talk about the Islamic State, but also the possibly of a “lone wolf” attack, as brought up by President Obama this week. "No government is going to have the capacity to read every person’s texts or social media," he said during a press conference. Obama also weighed in on their international fight against ISIS:

As we keep up the pressure, our air campaign will continue to hit ISIL harder than ever, taking out their leaders, their commanders and their forces. Squeezing ISIL's heart at its core in Syria and Iraq will make it harder for them to pump their terror and propaganda to the rest of the world.

Each candidate comes to the table with a different outlook on this topic. Third-place candidate O’Malley has criticized how America takes on terrorism. During the Nov. 14 debate, the former Maryland Govenor stood out with his call for America to reinvent their foreign policy. “Our role in this world is to be a beacon of hope," he commented. He also claimed that the situations in Afghanistan, Iraq, Libya, and Syria are deplorable because of a lack of “human intelligence” on the ground.

Sanders, however, has a lot of supporters when it comes to his beliefs on the topic. According to a Dec. 13 Washington Post-ABC News poll, Sanders beats Clinton 2-to-1 when it comes to his stance on handling terrorism. Not only has the leading candidate taken a more hands-off approach when it comes to national security, but last month, Sanders correlated climate change to terrorism. “The reason is pretty obvious: If we are going to see an increase in drought and flood and extreme weather disturbances as a result of climate change, what that means is that people all over the world are going to be fighting over limited natural resources,” he said during CBS' Face the Nation. He further explained how this trend causes turmoil:

As for Clinton? As the former Secretary of State, she’s certainly qualified when it comes to the question of national security. And Clinton has taken issue with the GOP’s answer as to how to combat terrorism. During a recent stop in Minneapolis, Minnesota, she not only talked about homegrown terrorism but how America can combat terrorism without resorting to the discrimination of Muslims. "Shallow slogans do not add up to a strategy," she commented. As Clinton said about her opponents, and particularly Ted Cruz, who has taken a hard stance on how to manage strife in the Middle East:

Promising to "carpet bomb until the desert glows"[…]makes you sound like you're in over your head.

But, before they can fight for our country, they have to fight one another first on Saturday. Ready to tune in?

More Like This
Does The FDA's Plan To Limit Lead In Baby Food Go Far Enough?
Even If Your Baby Sleeps Better in Your Bed, It’s Still Not Recommended
Sweet Valentine's Day Quotes
76 Valentine's Day Instagram Captions For Every Love Post
What Parents Are Talking About — Delivered Straight To Your Inbox