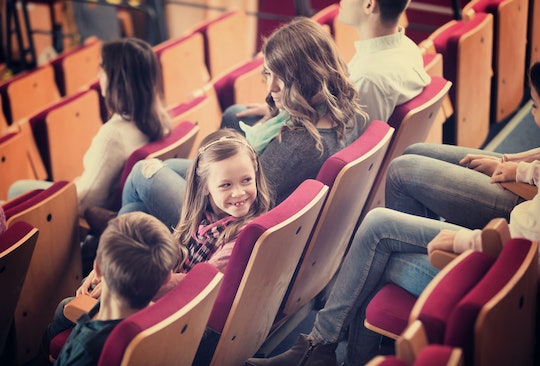 Even with all the amazing entertainment options available at home, there's still nothing quite like the excitement of watching a film inside a movie theater. The dim lights, giant screen, and gathering of fellow moviegoers is magic. In general, what's the best age to take a kid to the movies for the first time and actually enjoy the experience? Chances are, you want your kiddo to have the full big-screen experience as soon as possible.

As with so many parenting questions, the answer is: it depends on your kid. In general, though, it looks like a lot of kids see their first movie in the theater around the age of 3 or 4, as explained in Common Sense Media. Remember that there are a lot of things going on in a movie theater, including crowds and loud noises. It's wise to make sure your kid can deal with these distractions, as well as the whole ordeal of sitting in the dark for a little over an hour. Really, the movie theaters that are so enticing to parents can hold a lot of potentially scary things for children. I know one kid who refused any future cinema trips after getting folded up in the chair at the movie theater, because he was too light to hold the seat down. There are hazards aplenty, in other words.

It's also important to consider your kid's attention span and ability to sit still for extended periods of time. For instance, most toddler-aged kids can't sit still long enough to get through an entire movie, as explained in Very Well Family. It's just not a part of their development yet. The kid will start running up and down the aisles in no time.

That said, there's also the whole movie thing to consider as well. Remember that small kids don't differentiate between fantasy and reality very well, so whatever your kid sees on screen may be interpreted as factual reality, according to Baby Center. This means that even the most cartoonish scenes of action might straight-up terrify your kid. It's also worth noting that plenty of G-rated family films have scenes that can scare the bejeezus out of little kids. I vividly remember some of the Cruella de Vil scenes in 101 Dalmatians completely freaking me out as a young kid. You probably have similar memories of otherwise kid-friendly movies, too. For whatever reason, those early experiences with movies just stay with you.

When you finally decide to brave the movie theater with a tot in tow, there are a few ways you can make the whole experience more pleasant for everyone. Explain the basics of movie theater etiquette beforehand, and practice whispering with your kid. (It takes some of them a while to understand the whole idea of speaking quietly.) Choose some aisle seats to make bathroom trips a little easier, as noted in What To Expect. And if your kid does go into meltdown mode, don't hesitate to leave before the credits roll. And don't feel embarrassed about it, either, because exiting a movie early with a screaming kiddo in hand is a rite of passage in some parenting circles. Just trust that your kid will get the hang of moviegoing soon enough. Until then, there are plenty of flicks to watch at home.