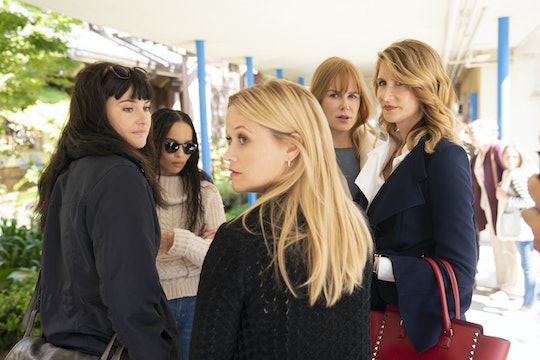 It's been a hot minute since HBO's breakout hit Big Little Lies ended with a bang. I'm still thinking about how it all went down and I'm sure I'm not alone. Since then, fans like me have been (im)patiently waiting for Season 2 to hit the airwaves. What becomes of the "Monterey Five" remains to be seen. Will any of them crack under the pressure? Ugh. I can't wait to find out. If you're nodding along, what is the Big Little Lies premiere date — so you can rearrange your life around it like I plan to?

Big Little Lies airs Sun., June 9 at 9 p.m. ET. The highly anticipated announcement was made at the 2019 TCAs in February 2019, which feels like a lifetime ago. In an April press release from HBO, the second season is a "subversive, darkly comedic drama [that] will explore the malignancy of lies, the durability of friendships, the fragility of marriage and the vicious ferocity of sound parenting." While that's dire enough, the press release added, "Relationships will fray, loyalties will erode…the potential for emotional and bodily injury shall loom." I don't know about you, but they had me at "subversive" and "dark."

The follow-up to the massive hit series, directed by legendary TV mastermind David E. Kelly (and based on the book by Liane Moriarty), will gift you with seven heart-pounding episodes. Not only that, but the entire original cast returns, with the addition of the iconic Meryl Streep as Perry's (Alexander Skarsgard) mother, looking for answers about his death. And if you're wondering if Skarsgard is out for the season, actress Nicole Kidman reassures fans during a panel at the Wing previewing season 2 saying, "He was the most incredible acting partner, and then he came back for season 2." She went on to explain her way out of it without giving any spoilers adding, "He has a little bit of a part in the sense of … the basis of … okay, I’ll be quiet. He didn’t abandon us. We’ll put it that way." Sounds like the husband everyone loves to hate may re-emerge in flashbacks to possibly connect his upbringing (by Streep's character) with the monster he turned out to be.

There will be a few key differences in Season 2, as noted by Cosmopolitan back in May. For one, director Jean-Marc Vallée didn't return this season. He previously said, "If we do a season 2, we’ll break [a] beautiful thing and spoil it." His replacement, Andrea Arnold, (Transparent and I Love Dick ,Wasp ) directed all seven episodes. So, what about the story itself? If you're a fan, you already know Season 1 is based on the work of author, Moriarty. She didn't write a sequel, but did create this fresh new story specifically for the series. And as if that's not enough awesomeness, Kidman and co-star Reese Witherspoon, teamed up again to executive produce. "I’m thrilled to be bringing back this talented team of artists," Witherspoon said. "It gives us the opportunity to delve deeper into the lives of these intriguing and intricate Monterey families and bring more of their stories back to the audience who embraced and championed them."

Whew! That's a lot to take in. With only a short time between you and the premiere of Big Little Lies, you might want to go back and rewatch the entire first season so it's fresh in your mind. I'm not biased or anything, but Season 2 may just top everything that happened before the Season 1 finale.