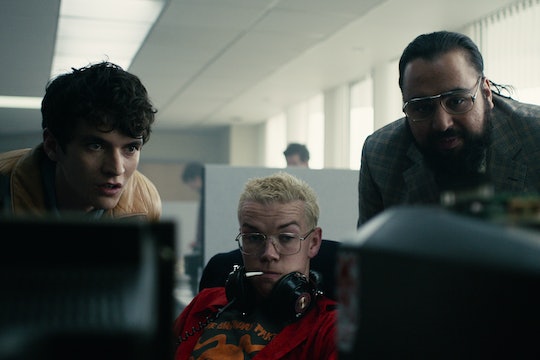 'Black Mirror: Bandersnatch' Journeys Back In Time To The '80s

On Dec. 28, the very first Black Mirror movie will premiere on Netflix. Though the show previously dropped the special White Christmas in between its second and third seasons, a movie is something new. Called Bandersnatch, it journeys into the past while continuing to confront the technological anxieties the show is famous for. But what is the Black Mirror movie Bandersnatch about?

Bandersnatch follows a young programmer named Stefan, played by Fionn Whitehead. While working for a video game company in 1984, Stefan decides to adapt the fantasy novel Bandersnatch into an adventure game. But the deeper he delves into his task, the more he begins to question his reality. The fictional novel Bandersnatch seems to be one of those doorstopper epics that were so popular in the 1980s, though neither the trailer nor the movie's summary reveal exactly what it's about. Stefan dubs its fictional author Jerome F. Davis a "genius" in the trailer, though one of his coworkers points out that Davis is also known for having beheaded his wife. Major yikes.

As Stefan researches, surrounded by notes and books about Davis, strange things start occurring. He receives a VHS tape marked "JFD Dec." that reveals odd illustrations and a work station covered in bloody sigils. There's obviously more to Bandersnatch than Stefan is aware of at first.

Unfortunately, the trailer keeps the plot details obscure. While the distinctly '80s refrain of "Relax" by Frankie Goes To Hollywood plays, it instead offers up a series of confusing and ominous images. Stefan paces, perhaps loses time; his hands shake, and later he plunges one directly into a mirror like it's made of water. The pupil of someone's eye dilates to a terrifyingly large size. Clawed hands curl around a doorway. Someone holds a knife. And words flash in between each shot: "Change your mind. Change your life. Change your past, your present, your future."

The simplest explanation would be that Stefan is perhaps becoming unspooled from reality thanks to the unknown pills his coworker gives him. But things are never simple on Black Mirror. There's definitely something much darker going on connected to the titular novel and its murderous author. The tagline also indicates that there could be some time-travel involved as well, which might be why the trailer focused briefly (but significantly) on a digital clock.

The origin of the term "bandersnatch" could provide a hint about the horrors in store in the movie. It comes from the work of Lewis Carroll: in the novel Through the Looking-Glass and the poem "The Hunting of the Snark," a bandersnatch is a ferocious creature with a long neck that can move very fast. Perhaps the claws glimpsed in the trailer belong to a bandersnatch?

A monster may have been the inspiration for Davis' book until it started hunting him — and, subsequently, Stefan. But that's just one theory. Whatever unfolds over the course of Black Mirror: Bandersnatch is sure to upend the audience's expectations even as it offers them a fright or two.