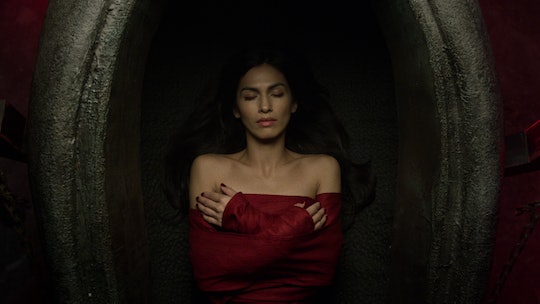 'The Defenders' Introduces A Powerful Weapon

Though there are numerous villains populating the world of Marvel's Netflix shows, one has been taking up greater prominence as time goes by. That would be The Hand, a group of warriors that have existed over the centuries with the intention of locating and unleashing something they call the Black Sky. The Hand has been controlling a lot of the action from behind the scenes, but now it looks like they've finally accomplished their goal just in time for the newest Marvel series to drop. They acquired the weapon they had been searching for. But what is the Black Sky on The Defenders?

Understanding exactly what the Black Sky is supposed to do is a little bit tricky because of how vague the shows have been about it. It's some kind of violent entity that inhabits the body of a person and turns them into a living weapon responsible for leading The Hand. In Season 1 of Daredevil, the Black Sky was just a child. He was a young boy who was assassinated by Matt Murdock's mentor Stick before he could wreck any havoc for The Hand. Now there is a new Black Sky, one who promises to do some serious damage in The Defenders whether she wants to or not.

Stick belongs to a group called the Chaste that seeks to prevent the rise of the Black Sky and temper The Hand's growing power. The Chaste are supposed to be the good guys despite the fact that they are quite literally enlisting kids in their war and turning them into child soldiers to fight The Hand. That was what Stick trained Matt for before abandoning him, but Matt wasn't the only kid he brought to the fight. Which brings this back to the Black Sky.

Elektra Natchios was another of Stick's protégées, though flashbacks from Season 2 of Daredevil made it clear she was different from the start. She had a sense of innate violence that she didn't seem to fully understand and that made her a target of both groups: both The Hand and the Chaste believed she was the Black Sky, so one wanted to control her and the other wanted to kill her.

Elektra resisted her fate after she learned about it, but that wasn't enough to keep her safe. She was killed protecting Matt during the big battle against The Hand at the end of Daredevil Season 2, and The Hand took that as an opportunity to turn her into their weapon. Elektra gets resurrected, and The Defenders catches up with her there: unaware of who she is, and apparently unwillingly fulfilling her destiny.

The Black Sky isn't only a weapon, she's a person. And that makes either defeating her or saving her a lot more complicated.