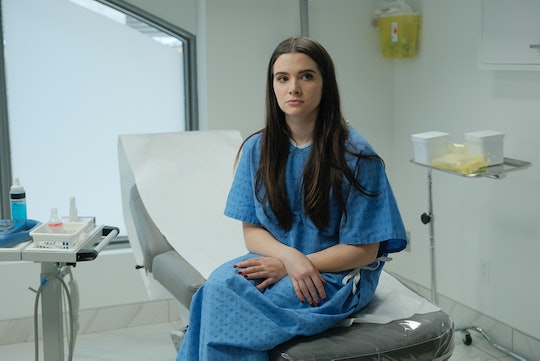 The Bold Type has been tackling important cultural issues from the get go. Including from race, LGBTQ identity, to women's health. For example last season, after losing her mom to breast cancer, Jane tested positive for a gene mutation called BRCA, and is now facing some life decisions because of it. But exactly what is the BRCA gene, and what can it mean for women who have it?

Although the health issue is part of a fictional storyline, BRCA gene mutations are a very real thing, and they can indicate whether or not you are at a higher risk of breast or ovarian cancer. According to the Mayo Clinic, a blood test can analyze your DNA to see reveal any dangerous mutations in your BRCA1 and BRCA2 genes - the genes that indicate your susceptibility to breast cancer. And just as in Jane’s case, when these genes are inherited from family, the risk of developing ovarian and breast cancers is increased.

So exactly how does the mutation of these genes increase your risk of cancer? According to Cancer.gov, certain human genes, like the BRCA1 and BRCA2 genes, produce reparative proteins called tumor repressor proteins, which help fix damaged DNA and stabilize the cell’s genetic material. But if those genes are mutated, they may not produce this protein, resulting in DNA damage that can lead to certain types of cancers. If a person’s parent has the BRCA1 or BRCA2 mutation, there is a 50 percent chance that their child will inherit it, which is why children of cancer patients are more likely to be screened for it.

While the gene testing has been around for quite some time, it was Angelina Jolie who brought the gene to the forefront of pop culture. In a 2013 op-ed she published in the New York Times, Jolie revealed that she had been screened for the BRCA gene mutations because of her mother’s battle with cancer. She tested positive for a BRCA1 gene mutation, and was told that she had an 87 percent chance of developing breast cancer, along with a 50 percent chance of ovarian cancer. Jolie then opted to take preventative measures and had a double mastectomy. A few years later, in another New York Times op-ed called Diary of a Surgery, Jolie discussed her risks of ovarian cancer due to the BRCA1 gene mutation and how that led her to have both of her ovaries removed.

While the risk of cancer is quite high, not all BRCA gene mutations require surgery, and not all of them will result in cancer. Cancer.gov states that the BRCA1 gene mutation can increase your risk of breast cancer by 72 percent and ovarian cancer by 44 percent. And the BRCA2 mutation can increase the breast cancer risk by 69 percent and the ovarian cancer risk by 17 percent. A positive result does not mean a person will end up with cancer, but it’s important for people — both men and women — to continue to get screenings and monitor their health closely with a genetic specialist.

On The Bold Type, Jane’s doctors are now asking her to decide whether or not she wants to have children, and that is because of her increased risks of developing ovarian cancer. It’s not going to be an easy decision at the age of 25, but unfortunately it’s a choice some women have to make when facing reproductive risks. Now, whether or not she chooses to have a baby is up in the air, but hopefully, she’ll have Dr. Ben there to help guide her through the whole process. The Bold Type airs on Tuesdays at 8 p.m ET on Freeform.