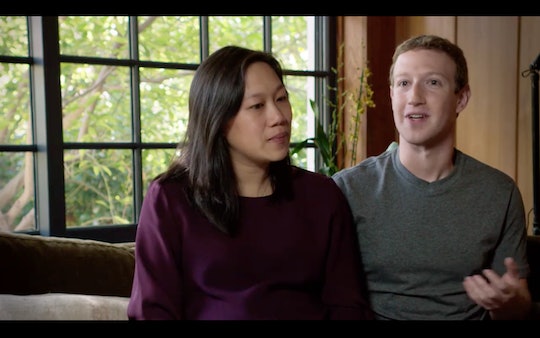 As you begin the next generation of the Chan Zuckerberg family, we also begin the Chan Zuckerberg Initiative to join people across the world to advance human potential and promote equality for all children in the next generation. Our initial areas of focus will be personalized learning, curing disease, connecting people and building strong communities.

The most surprising part of this announcement was that Zuckerberg and Chan plan to give away 99 percent of their Facebook shares (currently estimated at approximately $45 billion) over the course of their lives in order to fulfill the mission of the Chan Zuckerberg Initiative. Many critics at first assumed this lofty proposal was a guise for a hefty tax write-off, but tax experts have weighed in on Zuckerberg's financials to defend the billionaire: by setting up the Chan Zuckerberg Initiative as an LLC instead of a charitable organization, they actually can't receive tax write-offs.

So, what exactly is the Chan Zuckerberg Initiative designed to do? At first read from the letter to their daughter Max, it might seem like a pie in the sky attempt at world peace and global harmony. But according to a new video posted to Facebook Wednesday and a follow-up post Friday, Zuckerberg and Chan opened up to reveal more about what their world-changing initiative is all about:

Zuckerberg revealed that is initiative was born directly out of becoming a parent. In his post he notes, "Having this child has made us think about all of the things that should be improved in the world for her whole generation." Chan agreed: "We need to make sure that there are investments in programs that ensure that the future isn't going to be like today, the future is going to be better than today." Zuckerberg describes this new initiative as a "basic moral responsibility" for him and his wife — and hopefully, other so-inspired individuals — to invest in a more socially responsible future for the next generation.

The Chan Zuckerberg Initiative plans to tackle the big issues, but Zuckerberg is candid that these problems can't be solved overnight.

Sure, there are many areas where investment now will solve problems for today and also improve the world for the future. We do muster the will to solve some of those.

But for the problems that will truly take decades of investment before we see any major return, we are dramatically underinvested.

One example is basic science research to cure disease. Another is developing clean energy to protect the world for the future. Another is the slow and steady improvement to modernize schools. Others are systematic issues around poverty and justice. There is a long list of these opportunities.

Bold promises, indeed. But seeing as how much Zuckerberg has attained and accomplished already by the young age of 31, I have a feeling that the new dad just might be on to something.