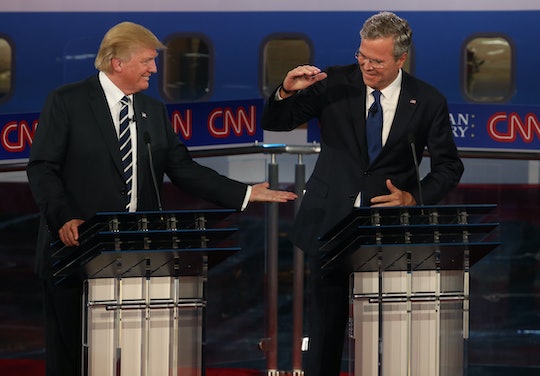 What Is The CNN GOP Debate Topic? There Are Likely Several

It may feel like we are in the know about the presidential candidates’ stances on... well everything. But, alas, another Republican debate is in the works, this time airing on CNN on Dec. 15 at The Venetian in Las Vegas. While it is pretty clear who will be in attendance, it does lead us to wonder: What is the CNN GOP debate topic?

CNN hasn't announce a specific topic for the debate, which means it could touch on the expected issues, or it could veer into unanticipated territory. Or it could start very structured and veer into unanticipated territory. At the Nov. 10 Fox Business News debate, we heard plenty of economic talk, but we also saw a certain candidate bring things to a screeching halt when he called out Carly Fiorina for “interrupting.” Oh yeah, and there was that argument about whether or not a "big, beautiful wall" will solve the Mexico immigration “problem.” Just me, or does a commitment to discuss the economy always turn into a talk about everything but the economy? So we should probably expect roughly the same trajectory — on course, then suddenly headed in a totally new, possibly weird "warm kiss" direction.

Just in light of what's happened in the world and in the news recently, there are some topics we can count on moderator Wolf Blitzer at least attempting to address with the Republican hopefuls. Though the network has been pretty tight-lipped about how the event will be moderated and what questions to expect, it shouldn’t be too hard to conjure up some of the issues the GOP candidates will be sparring over. Here are four they're almost sure to address:

In light of the San Bernardino shootings which claimed 14 lives, it’s impossible that the topic of terrorism — specifically domestic terrorism — will be ignored. Immediately following FBI reports that Syed Rizwan Farook and Tashfeen Malik were radicalized, Donald Trump called for “a total and complete shutdown of Muslims entering the United States until our country's representatives can figure out what is going on." While his statements have been denounced by many, it looks like it hasn’t slowed down his campaign, as an NBC News and Wall Street Journal poll shows that almost half of Republicans support a Muslim ban.

Trump is a polarizing figure, even within his own party. And it totally feels like he is working overtime at making decisive comments. I mean, late last month Trump was in hot water for making an ableist comment against a New York Times reporter. Then there was his crusade to ban Muslim immigration. But Trump’s abrasive nature is an issue that has been talked about on and off the stage. And who could forget when Rand Paul called out Trump for his “sophomoric” behavior and “careless” language at the second debate? I didn’t because Trump called Rand Paul ugly in response. Don't be surprised if the other GOP candidates use Tuesday's debate as an opportunity to discuss how bad for the country they think a Trump presidency would be.

Between the San Bernardino and Planned Parenthood shootings, the topic of gun control and violence is at the front of many people's minds. From the New York Daily News’ “God Isn’t Fixing This” cover to the New York Times’ “End the Gun Epidemic in America” op-ed, the first to grace the front page since 1920, this charged issue is one that is widely contested by many — including people in the Republican party. On Dec. 6 , Republican nominee John Kasich called for those on the terror watch list to be banned from getting guns.

Let’s face it: Hillary Clinton is a hot topic within the Republican party. And among the candidates, she the one thing that they can agree on (hint: they are less than in love with her) and will attempt to shoehorn into the conversation at any opportunity. So it isn’t too farfetched to expect that Clinton’s name will be dropped more than quite a few times — not in the most complimentary of ways, and definitely to an applause break (or two).