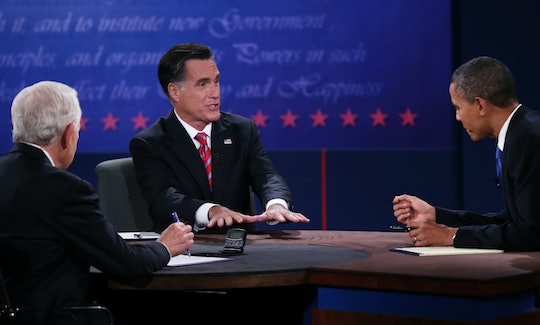 What Is The Commission On Presidential Debates? The Non-Partisan Group Is Surprisingly New

Incredibly, presidential debates actually aren't a requirement, but more of a tradition. According to the CPD, there were no debates held leading up to the 1964, 1968, or 1972 elections, and the debates of 1976, 1980, and 1984 were "hastily arranged" due to last-minute negotiations. Things really went downhill in 1988, when the League of Women Voters, which had previously sponsored the presidential debates, backed out of its sponsorship after the George H.W. Bush and Michael Dukakis campaigns presented the League with a 16-page list of demands that included control over selection of the moderators, whether to allow third party candidates, and the composition of the audience. League President Nancy M. Neuman called the demands "a fraud on the American voter." That's when the CPD, a non-profit meant to "organize, manage, produce, publicize and support debates for the candidates for President of the United States," stepped in.

Studies from both Harvard and Georgetown Universities had shown that, while debates were beneficial to voters, leading candidates often declined to participate in them, and the universities implored the Democratic and Republican parties to come to an agreement to ensure debate participation by their candidates. Thus, the CPD was formed, originally chaired jointly by Paul G. Kirk, Jr., and Frank J. Fahrenkopf, Jr., who at the time served as the heads of the Democratic and Republican parties. Fahrenkopf still serves as co-chair alongside Michael D. McCurry, who served as White House press secretary during the first Clinton administration.

The CPD board is made up of esteemed volunteers, among them former politicians, journalists, and university presidents. The Democratic and Republican parties are no longer affiliated with the CPD, and they're not funded by the government or either party. They subsist solely on donations, and employ strict criteria in selecting candidates for debates. A candidate need not be a member of a major party – or any party, for that matter – in order to participate; the main requirement is that the candidate must be polling at 15 percent or more according to five major public opinion polls. This may sound unfair, but the likelihood of someone polling at 5 percent smooth-talking their way up to 51 percent over a three hour span is pretty slim; inclusion of everyone who asked nicely would merely take away precious time from more viable candidates. It's messy, but it's fair, and it works. Voters should be grateful for the CPD whipping their candidates into shape.