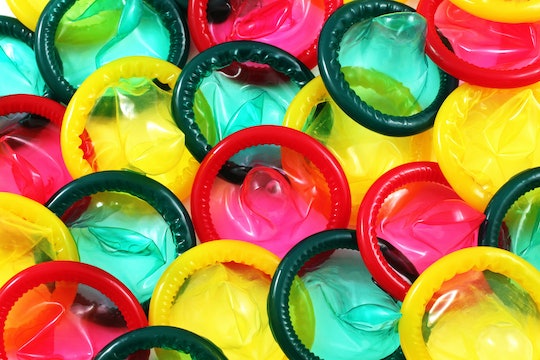 Hearing About The "Condom Snorting Challenge"? Here's What Parents Need To Know

At the risk of sounding like a crotchety old woman, I'm gonna go ahead and say it. What is it with "kids these days" and their increasingly bizarre online challenges? Because honestly, many of them are downright disturbing — and not to mention, dangerous. That's why it's so important for parents to be aware of the latest trending challenges. Because talking to older kids about the risks involved — all for the sake of a like or a share on social media, mind you — before they catch wind of the fad and decide to try it out for themselves. Most recently, you might find yourself wondering what exactly the "condom snorting challenge" is and what parents need to know about this teen trend.

So here's the lowdown on the "condom snorting challenge." Apparently, teens are shoving an unwrapped condom up one of their nostrils, plugging the other nostril, and then snorting it until the condom comes out of their mouth, as USA Today explained. As USA Today reported, this particular online challenge has actually been around for years, but it supposedly recently resurfaced on social media. Take a look at the 2013 video, below, to see the condom snorting challenge in action.

Fair warning: It may very well trigger your gag reflex just watching it.

The seriousness of online challenges like this one have even prompted some educational resources for parents at the local level. In San Antonio, for example, a drug and alcohol prevention class for parents has evolved into including information about online trends, local Fox News affiliate KAAB-TV reported. "Because these days our teens are doing everything for likes, views, and subscribers," Stephen Enriquez, the class instructor, told the news outlet. "As graphic as it is, we have to show parents because teens are going online looking for challenges and recreating them."

So risk-wise, here's what parents need to know when it comes to the condom snorting challenge. Bruce Lee — who is an associate professor at the Johns Hopkins Bloomberg School of Public Health — recently wrote a column for Forbes about the danger of this particular trend. “The condom could easily get stuck in your nose or your throat, blocking your breathing or causing you to choke,” he wrote.

In fact, the list of what people should be snorting up their noses, according to Lee, is incredibly small: Air. "The only possible addition to this list would be medications like nasal sprays, but only when your doctor recommends them and there is a true medical indication," he wrote, according to Forbes, adding:

Otherwise, anything else that goes up your nose can damage the sensitive inner lining of your nose, cause an allergic reaction, or result in an infection.

Health risks aside, I can't image the condom snorting challenge would feel, taste, or smell too great.

Of course, this isn't the first online challenge to freak parents out — not by a long shot. As USA Today reported, the cinnamon challenge is another fad that comes and goes on social media. And then there was the Kylie lip challenge — apparently inspired by Kylie Jenner's lip injections that started back in 2015, according to BuzzFeed. For the challenge, people put a shot glass around their mouth and then sucked hard for several minutes — leaving lips swollen, bruised, and in some case, even requiring stitches, ABC Action News reported.

And who could forget the original condom challenge? This particular fad involved a condom that's filled with water and then dropped over a person's head, TODAY reported.

It's sort of odd, isn't it? That teens need to be told not to use condoms, after drilling through their heads the dangers of sexually transmitted infections and risk for pregnancy without them. Let's just stick to using them for their intended purpose — safe sex. Because teens (and their parents) have enough to worry about as it is.

More Like This
Bluey's Mom Chilli Graced The Cover Of 'InStyle' & It's The Recognition She Deserves
Harry Styles Running To Hug His 78-Year-Old Super Fan At The Grammys Will Make Your Day
Parents Have Thoughts After Court Orders Nursing Mom To Use Bottle In Custody Dispute
6-Year-Old Boy Has Zero Regrets After Ordering $1,000 Worth Of Food On Grubhub
What Parents Are Talking About — Delivered Straight To Your Inbox