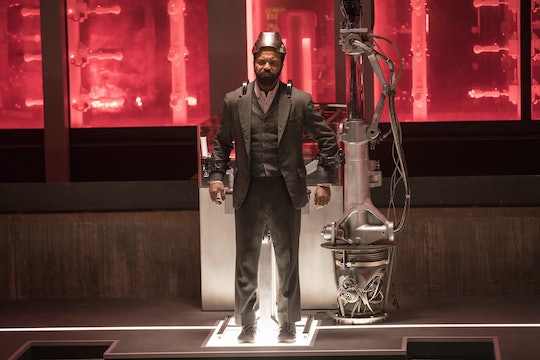 Everything You Need To Know About The Cradle On 'Westworld'

It's easy to get lost in a sea of terms on Westworld. The show has introduced all kinds of new concepts over the course of two seasons, and many are integral pieces of the show's many puzzles. One new locale that seems to be especially important to Season 2 is a place called "the Cradle." But what is the Cradle on Westworld?

Audiences are still figuring out how Westworld works, as new facets of Delos Destinations seem to be uncovered every episode. The Cradle was confusing when it was first introduced, especially since it was revealed that it had been destroyed in the two-week later timeline. Viewers might have still been hazy about what it was at that point, but soon enough the show shed light on the Cradle. In "Phase Space," Bernard and Elsie ventured directly into it — literally, in Bernard's case.

The technical name for the Cradle is Room CR4-DL. It's where all of the hosts' data is stored, including their personalities, memories, and storylines. It also tests all the narratives in simulations so that the techs can see how everything will unfold before it's actually implemented into the park. Destroying it means the majority of Westworld's intellectual data is gone, which one can only assume will have repercussions on the rest of the season (if not the rest of the series).

In a Behind the Scenes video, co-creator Jonathan Nolan explained a little bit more about CR4-DL. According to him, the Cradle is like cold storage for the hosts' minds. It stores copies of the hosts' brains, providing a backup on every single host in the park. Elsie says they're alive in there, creating a hive mind that functions independently of their bodies. The programming and memories remain there no matter what happens to them in the park.

This opens up all kinds of possibilities. Can any host be reset using their backup from the Cradle? Could lobotomized hosts like Clementine and Peter Abernathy be returned to some semblance of their past selves using the versions of them stored there? Can out of control hosts be brought back to their former, less aware states? That seems plausible, as co-creator Lisa Joy said in the Behind the Scenes video, "No matter what happens to your body, you can be born again as long as you have these pearls." ("Pearls" refer to the hosts' brains, and it's yet another new term. Vocabulary is fun!)

What does the destruction of the Cradle mean for the park? It's possible destroying the Cradle was part of Dolores' plan; if she got rid of the backups, then it took away one more tool the humans had to control the hosts.

Elsie and Bernard paid a visit to the Cradle once they discovered that it wasn't performing in the way it typically does. It was sending out unknown messages and "improvising" in a way it should not have been capable of doing. Bernard decided to plug into the Cradle himself (which involved a painful extraction of his scalp and brain, a.k.a. pearl) and take part in a simulation. It brought him through Sweetwater and into the Mariposa, where Robert Ford was playing a jazzy tune on the piano despite the fact that he's long dead.

If Ford has managed to keep some version of himself alive within the park's technology, then that might mean he's the one causing the Cradle to act in unusual ways. Though Dolores killed him at the end of Season 1, it seems like Ford's days of plotting within the park are far from over. He might be using the Cradle to accomplish something new, though just what that is remains to be seen. That could be another reason Dolores decides to demolish it (if indeed she's the one who does): she's putting an end to Ford once and for all.