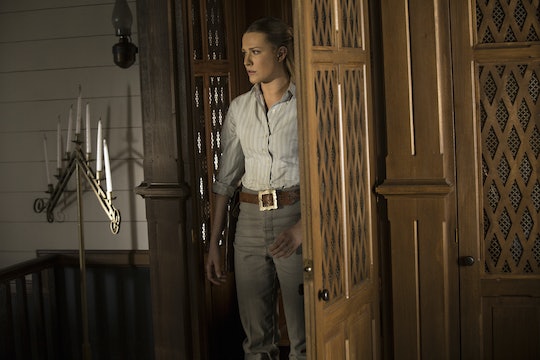 Since its premiere, the first season of Westworld has been subtitled "The Maze" in reference to the game that the Man in Black spent all 10 episodes seeking. It ended up being something he couldn't have predicted: a test for host Dolores that proved she was moving beyond her programming and developing an inner self. Solving the maze indicated a host was becoming sentient. Season 2 has its own subtitle, too: it has been dubbed "The Door." But what is "The Door" on Westworld?

That question isn't easy to answer before the new season debuts on April 22. But it's clear that whatever the door is, it will be as definitive to Season 2 as the maze was to Season 1. Though the maze remained a mystery for a long time, it ended up being much more than just a game or a test. It was a metaphor for the journey many of the characters undertook — host and human alike. The park itself was like a maze and as everyone traveled deeper and deeper into it, they learned more about themselves.

The metaphor of the door has already been hinted at by showrunners Jonathan Nolan and Lisa Joy, who spoke about Season 2 with Entertainment Weekly ahead of its first episode.

Nolan described Season 1 as "a journey inward" while characterizing Season 2 as "journey outward," going on to tell EW:

Joy seemed surprised that Nolan shared the title, so it seems like the door will be integral to whatever happens in the new season. And all of the questions Nolan posed could connect to it: more parks can be entered through doors, new areas of the park could hide behind doors, and getting out of the park could involve getting past a door, too. However, the maze was both literal and figurative, so viewers can expect that the same will be true for the door.

Opening a door can represent new possibilities. Way back in Season 1, William made a choice between a white hat and a black one before he opened a door to the train that took him into Westworld. Entering the park led him into a new world that taught him things about himself he never would have realized otherwise. Now that the hosts are becoming self-actualized, they're also opening doors that may result in them discovering who they really are.

But while the door of the title may be a metaphor for an expanding universe, it can also be quite straightforward. Trailers have indicated that Maeve will be taking a trip to Shogun World, another of the parks under the Delos umbrella that was revealed in the Season 1 finale. She may do so through a door. And there are so many aspects of Westworld that remain undiscovered, lurking behind closed doors that the characters must find a way to unlock.

"The Door" can be a physical thing, but it's also the perfect way to encapsulate how all of the characters are figuring out more about the world they live in. Season 2 might have as many unexpected twists as the first, but each turn will lead its characters farther and farther from where they started — opening door after metaphorical door as the scope of the series broadens.