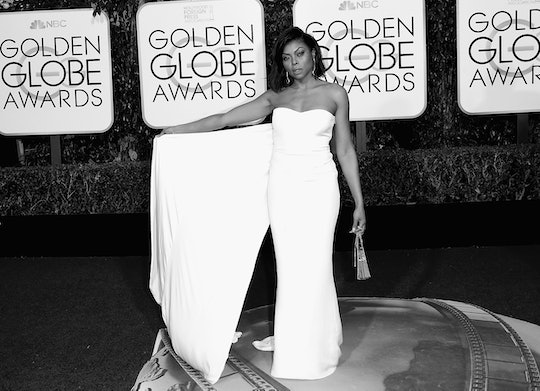 What Is The E! Glambot? It'll Be Snapping Celeb Photos At The Golden Globes

During their 2016 Golden Globes red carpet coverage, E! unveiled a new, futuresque feature that they've highlighted — so exactly what is the E! Glambot? Along with Joseph Kahn, the director behind several Taylor Swift music videos, E! worked with the network to create an eight-foot robotic arm called the E! Glambot. Thanks to technology, the Glambot will be taking photos of celebrities as they arrive and shooting them directly to E!'s Instagram account. The pictures have an almost 3-D, cinematic look to them — and definitely surprised me with their great quality. It's a big step-up from the regular paparazzi snap.

Joseph Kahn helped E! plan their Golden Globes coverage for this year, and Kahn's team will work with E! to shape their artistic direction throughout the night. They'll use his directing skills to create portraits on the red carpet that fans can see ASAP on social media.

The network will also be offering up the most social media coverage they've ever had at the Golden Globes, according to Broadway World. Using Periscope's "PartyScopes," viewers can also share their viewing parties with E!, so people can see coverage from the other side of the screen. E! will also be using "GlamSnaps" on Snapchat, where the network's stylists will offer up how-to tutorials based on the best celebrity looks of the night.

Viewers can also interact directly with E! by commenting on the network's Twitter, Instagram, and Facebook accounts — if they react with anything particularly insightful or hilarious, it could end up on-air with E!'s presenters. The E! Glambot is still my favorite of their new offerings — and it should leave us with a great collection of some celebrity snaps. The question is, will any of them use the pics as their new profile pictures?