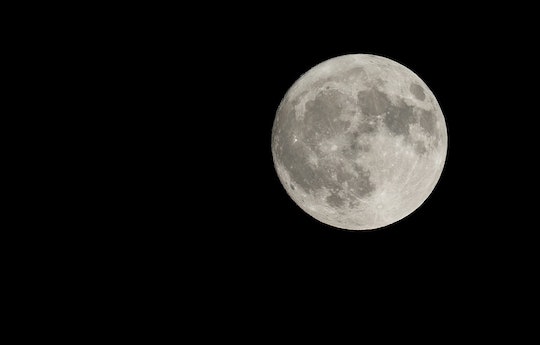 What Is The Full Cold Moon? It's Kind Of A Big Deal

Everyone has their own reaction to the changing seasons. In my case, the moment my feet are perpetually frozen and I'm hit with an intense desire to layer excessively, I know that winter has arrived. Nature, however, has it's own way of signaling the changing of the season (other than, you know, plunging temperatures, and the advent of Christmas music on every station). Every year, since essentially the dawn of time, the moon has been the guide for signaling the seasons and the full cold moon is one such sign. But what is the full cold moon and why should it matter to you?

According to The Weather Channel, the full cold moon is a supermoon that occurs in the winter, and this year is scheduled for December 3, and will be the last of this year. What exactly is a supermoon? I'm glad you asked, because although the terms "full moon" and "supermoon" coincide, they're not the same thing.

In the aforementioned article, TWC went into detail and explained that "a supermoon is a new or full moon that coincides with perigee", or, in non-meteorologist terminology, when the full moon is "near" Earth. Near, of course, is in quotations because all it takes is a whopping 362,146 kilometers for the full moon to be close enough to be considered super. Supermoons, opposed to regular full moons, appear much larger, brighter, shinier, and simply put, awe inspiring.

According to Time and Date, the lunar month used to be the ancient method of tracking the seasons, rather than the solar year, which current calendars and the modern 12 month system are based on. December, the article noted, is when winter fully sets in on the Northern Hemisphere, and as such, the full moon in December is noted by it's cold, and early darkness, earning it the name "the Cold Moon" or the "Long Night Moon." The Farmer's Almanac noted that for 2017, the Full Cold Moon will rise on Dec 3, at 10:47 AM in your local timezone. The moon occurs near the Winter Solstice (the shortest day of the year), and as such, is a doorway into winter, when temperatures drop and the days are short.

Other than that the given that the days are about to get a lot shorter and colder, what does the full cold moon mean for you? It means that even though holiday parties abound, you have yet another thing to celebrate: the last supermoon of the year.

Consider hosting a viewing party, with drinks, and maybe even a telescope if you have one. Head to an observatory, park, or even your own rooftop to get the best view. Better yet, get out of the city, and, if you live somewhere that isn't frigidly cold, camp out to view the supermoon.

If going outside isn't an option, for those who live in places that experience the "cold" during the full cold moon, host a moon- or space-themed movie party, punctuated by periodic breaks to view the last full moon of 2017. Grab a case of Blue Moon, keep some blankets and heavy coats by the door, and you're all set.

Whether you plan on viewing it or not, there is no denying that the full cold moon signals the end of the year and the beginning of a new season. Thought Co. noted that full cold moons are prime time for self-reflection, and goal setting for the new year. If you're looking for a quiet moment, in lieu of a party, analyze where you've been this year, how you've treated those around you, what you've done well, and where you can improve. Coinciding with Christmas and New Year, this full moon is yet another excuse to practice self-reflection, self-improvement, and gratitude. Or just to go out and look at a really cool moon — whatever floats your boat.