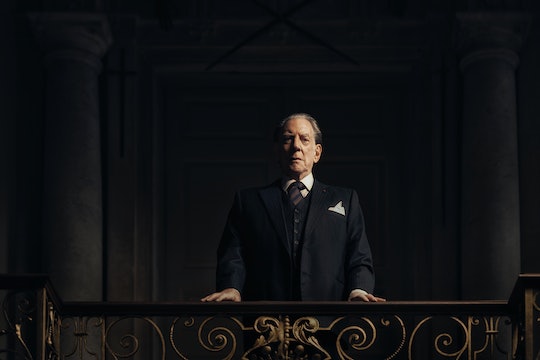 The new FX series Trust depicts one of the most scandalous stories in the history of one of America's richest families. It's one you might have heard before; the 1973 kidnapping of John Paul Getty III has resurfaced in pop culture time and time again thanks to the more perplexing details of both the case and Getty's family. Since the trappings of wealth and all that entails are so important to the show, you might find yourself wondering what the Getty family's net worth is. So how rich are they, really?

At the time John Paul Getty III was kidnapped, his grandfather J. Paul Getty was considered the richest man in the world, with Vanity Fair reporting that he was worth around $2 billion. That was notable because he refused to pay the ransom when his grandson was kidnapped, leading the ordeal to continue on for six months.

The screenwriter of All the Money in the World, David Scarpa, told Vanity Fair, "[The kidnapping] was happening against the backdrop of the oil crisis of 1973, when the price of oil skyrocketed to the point where [J. Paul Getty's] profits daily would've been enough to pay the ransom."

But how much of that wealth survived over 40 years later?

The Getty family money came from oil. Though J. Paul's father started the family business, he was the one to turn it into a major success after negotiating leases with Saudi Arabia and Kuwait in 1949. And that fortune did last through the generations: CNN reported in 2015 that J. Paul's 81-year old son Gordon Getty was the richest member of the family, worth around $2.1 billion.

Forbes lists the Getty family as the 56th richest in the United States. After his death in 1976, J. Paul left most of his estate to the Getty Museum; according to Forbes, it "contained his impressive collection of Western Art at the Villa in Pacific Palisades." His children benefitted from the Sarah C. Getty Trust, which J. Paul's mother had set up decades earlier; it held a 40 percent stake in Getty Oil, and Gordon was its sole trustee. When he sold the company to Texaco in 1984, the sale earned the family over $10 billion.

Mark Getty, one of J. Paul's grandchildren, would go on to create the stock photography business Getty Images with Jonathan Klein. When that company passed hands to the Carlyle Group in 2012, it went for $3.3 billion. While it's difficult to pin down the entire family's net worth because there are several members active today, it seems like their funds are still up there in the billions depending on who you're talking about.

Trust explores the influence and impact of such extreme wealth on the family, but one can't take it as undisputed fact. Ariadne Getty has reportedly taken issue with it and expressed her concerns via a letter written by her lawyer Martin Singer, which was printed in The Hollywood Reporter. It called the show "a cruel and mean-spirited defamatory depiction" of the Getty family, going on to say:

It is ironic that you have titled your television series Trust. More fitting titles would be Lies or Mistrust, since the defamatory story it tells about the Gettys colluding in the kidnapping is false and misleading, and viewers rightly ought to mistrust it.

You are using a false version of the Getty family tragedy for entertainment for your own financial gain. That is indeed ironic, since one of the themes of Trust is to portray my client's family as greed-driven.

It seems like Trust might be just one interpretation of the story, which viewers ought to keep in mind if they decide to tune in on March 25.