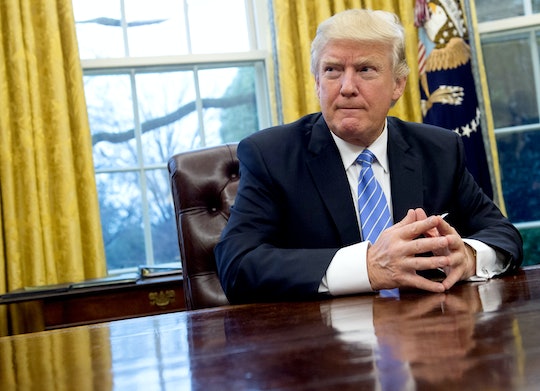 President Donald Trump's Administration has been seen to many as a threat to women's access to reproductive healthcare across the country. Now, it looks like Trump will affect women's access to abortions in other parts of the world, by reinstating the Mexico City policy, aka the global gag rule, which prevents the U.S. federal government from funding organizations across the world that perform abortions. What is the Global Gag Rule, and what does it mean?

The Global Gag Rule was introduced by President Ronald Reagan in 1984 as the "Mexico City policy" at the International Conference on Population in Mexico City. The policy prevents non-governmental organizations that provide or even refer abortions from receiving federal money (even though the Hyde Amendment currently prevents abortions from being paid for with federal money in the U.S. unless it's to save the life of the mother, and the Helms Amendment prevents the same thing internationally).

The policy has been revoked and reinstated several times during the past three decades: Presidents George H.W. Bush and President George W. Bush kept the policy in place, while President Bill Clinton and President Barack Obama both eliminated the policy.

Anti-abortion activists champion the policy because it encourages foreign non-governmental health care providers not to provide access to abortions or even mention that as an option when discussing family planning.

"I applaud President Trump for taking this important action and look forward to continuing to work together in advancing pro-life policies and protecting taxpayer dollars,” The Hill reported Texas Rep. Michael Burgess said in a statement. But, again, taxpayer dollars aren't allowed to be spent on abortions anyways.

It means IPPF will lose $100 million USD for proven programs that provide comprehensive sexual and reproductive health services for millions of women and youth who otherwise go without these vital services...[but] we cannot—and will not—deny life-saving services to the world’s poorest women.

Suzanne Ehlers, President & CEO of PAI, which advocates access to reproductive health care around the world, made a statement speaking on the dangers of Trump reinstating the Global Gag Rule.

Trump’s Global Gag Rule will obstruct and destroy the work of health care providers who are often women’s main—and sometimes only—source for reproductive health care, and their entry point for receiving a wide range of primary health care services. To be clear, this policy is an attack on women’s bodily autonomy and freedom, and we will see an increase in unintended pregnancies and unsafe abortions as a result.

The facts stand behind Ehlers statement: PAI reported that in countries that depended the most on U.S. government funding, the abortion rate was twice as high in comparison to more independent countries after Bush reinstated the Global Gag rule. In Kenya, some clinics closed because they lost funding, while others were only able to provide care for half of the women they once had.

Obviously, if you're cutting off women's access to birth control, the rate of unwanted pregnancies will increase. According to the Center for American Progress, if a health care provider refuses to sign the Global Gag order, they will not only lose funding; they'll also no longer receive donated contraceptives.

Blocking access to condoms is critically damaging in places such as central and western Africa, where amFAR, the Foundation for AIDS Research, reports that 6.5 million people are infected with HIV — and 60 percent of those infected are women.

And remember, for women who are pregnant and want to keep their babies, these clinics also provide prenatal care, which is essential in places such as sub-Saharan Africa, where 550 women die from childbirth each day, the World Health Organization reports.

There are many reasons why it's crazy that Trump is putting the reproductive health of women who aren't even American citizens on the line. But what it comes down to is that a few politicians' religious beliefs should not dictate whether a woman in Kenya will have access to birth control, or, really, the rest of her life.