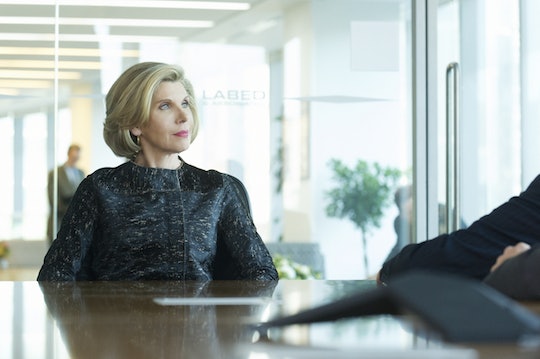 CBS's new drama The Good Fight is getting a lot of attention for bringing us back into the world of The Good Wife, but in a new spin-off with Diane Lockhart at the helm. She was one of The Good Wife's most beloved characters and Christine Baranski is more than capable of carrying a show on her own. But CBS' decision to air the show exclusively on CBS All Access, which is behind a paywall, is sort of annoying to non-subscribers, who would basically have to pay just to watch one show. So what is The Good Fight about? It actually seems like a strong premise and the cast is great.

The spin-off picks up a year after the slap heard 'round the world on The Good Wife's series finale. Diane is just finishing up negotiations on getting bought out of her partnership at the law firm in order to enjoy retirement when a massive financial scandal breaks. Henry Ridell, a financial advisor and patriarch of the "unofficial first family of Chicago," gets busted for running a Ponzi scheme which, among other things, has completely drained Diane's retirement fund. Upon realizing she has no savings, she scrambles to get her job at the law firm back, but David Lee and the other partners refuse to allow her back into the fold.

Diane's goddaughter Maia, played by Game of Thrones' Rose Leslie, just started working at the firm as her first job out of law school. But as Henry Ridell's daughter, she soon finds herself embroiled in scandal and out of a job. Diane and Maia wind up turning to Luca Quinn, played by fellow The Good Wife alum Cush Jumbo, for jobs at the law firm where she works. Last but not least, Eli Gold's daughter, Marissa, also joins the gang, first as Diane's secretary, but later, it turns out, as a talented investigator, joining The Good Wife's ranks of sexy/mysterious sleuths with dubious methods.

Rounding out the cast is Bernadette Peters, who plays Maia's disgraced mother, and we'll see plenty of guest appearances from familiar faces like Diane's old law partners. Although the series premiere will be televised on CBS Sunday, Feb. 19, the rest of the 10-episode first season will drop in weekly installments on the streaming service CBS All Access. It's the first scripted show CBS is trying this with, after successfully launching a CBS All Access-exclusive Big Brother mini-series and introducing NFL on CBS content on the streaming platform. Whether or not it works remains to be seen.