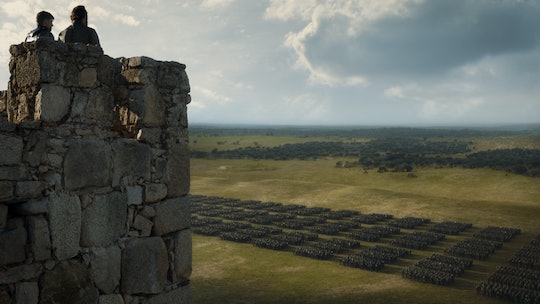 Winter is finally here and with it comes the Great War. But what is the Great War on Game of Thrones? It'll bring unlikely allies together.

Many fans expected an all out brawl during the Season 7 finale when all the major players (Jon Snow, Daenerys Targaryen, and Cersei Lannister) finally met up. However, it turns out Tyrion's idea to bring Cersei proof was a good one. Once the Hound unboxed the wight that Viserion basically died for, Cersei was shook enough to actually listen.

That's when Jon got to the big moment of his Powerpoint Presentation and explained "the Great War is here." Unsurprisingly, he wasn't referring to the fight for the Iron Throne. He meant the fight for the living against the army of the dead; the fight that Jon has been going on and on about for years now.

Once Jon showed Cersei proof the threat was not only real, but imminent, it became clear to her, as well as every one else, that the Great War truly is the one against the dead. Cersei was then ready to join Jon and Daenerys' fight against the wights, until Jon revealed that he'd bent the knee to Daenerys. However, Tyrion was able to change her mind. Or so she led her enemies to believe.

After agreeing to work with "the wolf and the dragon," Cersei later revealed to Jaime that she had no real intention of sending her armies up North for the Great War. Instead, she was still focused on her war against the Daenerys. Though everyone believe Euron jumped ship and ran back to the Iron Islands to avoid the Great War, in reality Cersei sent him to Essos to pick up 20,000 more men to fight in the war.

While everyone else is focused on the Great War, Cersei is thinking ahead. Her new plan of action is to let every one else duke it out with the army of the dead so, in the end, she'll only have to deal with whoever's left. Honestly, it's a smart plan but it won't work if the living don't actually defeat the dead, and while Dany and Jon certainly make a formidable team, they can still use all the help they can get. Unfortunately, that help isn't coming.

So will Cersei's plan actually work? Or will the dead go on to conquer the living? Unfortunately, fans will have to wait until next season to find out how it all ends for Westeros.