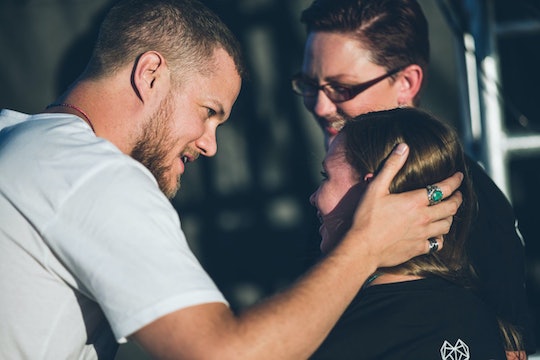 Here's Why You Need To Watch HBO's 'Believer'

There's nothing like a good documentary to get you totally fixated on an issue, which is why it's always nice to know what you're getting into before you hit play. Especially when it's on HBO, the network that rarely disappoints. So what's the new HBO documentary Believer about and how serious is it?

If you were looking for light fare, this is not it, but it does touch on a very important and timely issue. Believer is directed by Don Argott, who did The Art of the Steal, and follows Dan Reynolds, the frontman for the band Imagine Dragons. Reynolds, a Mormon, explores how his religious community treats its LGBTQ members over the course of a year as he organizes the LoveLoud Festival, a concert in Utah that benefits organizations like the Trevor Project and GLAAD.

HBO explains on its website that the doc "takes a broader look at The Church of Jesus Christ of Latter-day Saints’ treatment of LGBTQ members, it also focuses on the suicide rate in the community, which has skyrocketed in the last decade." The score of the film was composed by Hans Zimmer and includes two original songs by Reynolds. It was first premiered at the Sundance Festival this year.

The documentary has been received with mixed reviews. The fact is, LDS has a very antagonistic attitude towards the LGBTQ community. According to the Human Rights Campaign, the Church has recently started counseling its members to acknowledge LGBTQ behavior, but they do not condone LGBTQ people as, well, people. HRC explains:

While acknowledging the existence of inclinations and temptations — and admitting they do not know the origins of such leanings — leaders expect of gays and lesbians the same celibacy they require of unmarried heterosexuals. Gay and lesbians can participate fully in church activities as long as they abide by the rule of celibacy, with some restrictions.

HRC continues, "For example, while a heterosexual adult would be expected to date, gays and lesbians would be viewed with suspicion for similar activities. Leaders counsel gay and lesbian members to avoid associations with LGBTQ groups and individuals, lest they succumb to the temptation of sexual activity." Essentially, LGBTQ people are forced to either be "sinners" or not be validated at all as a human being, which can be detrimental to a person's mental health.

Reynolds says in the doc, “I don’t feel a need to denounce Mormonism. I do feel a need as a Mormon to speak out against things that are hurting people.” He adds, "If I’m passive, if I just stand back, which I have done, then I feel this burden. I feel like I am standing, then, for bigotry.” Hence throwing a music festival that's all about love, acceptance, and supporting organizations that work for the LGBTQ community. Hank Stuever of The Washington Post writes of the documentary:

Believer is heartfelt and earnest in all the necessary moments (and beautifully shot), but it’s ultimately about a straight, white, married father of three who wants to have it all ways — to be seen by his worldwide fans as an enlightened and empathetic rock star while remaining faithful to his church.

That being said, he does come at the issue from very personal experience. In the film, according to CNN, he talks at length about growing up Mormon and wrestling with marrying his now wife, Aja Volkman, because she wasn't Mormon. Volkman's friends, a lesbian couple, declined to go to their wedding because of the LDS' stance on LGBTQ rights.

In all, Believer is definitely worth a watch for anyone who thinks that the fight for LGBTQ rights is over. Because discrimination still exists, as is all too clear within the Mormon community.