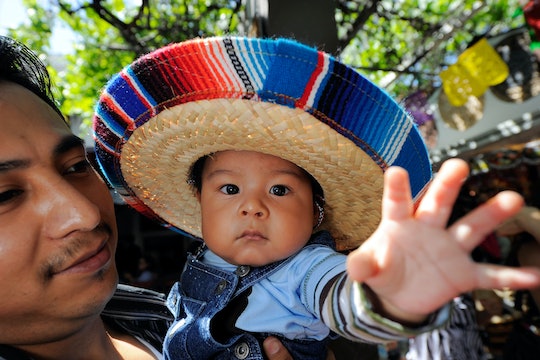 What Is The History Of Cinco De Mayo? Hint: Margaritas Not Involved

Next week, fiesta-lovers across the United States will gather to celebrate Cinco de Mayo. For many Americans, Cinco de Mayo is the day you saddle up to a bar and down a pitcher of margaritas with some friends. But Cinco de Mayo, which translates to “May 5” in Spanish, is one of the most misunderstood and misrepresented Mexican holidays. Most (non-Mexican) Americans have no idea what the history of Cinco de Mayo is all about, Carlos Tortolero, president of the National Museum of Mexican Art in Chicago, told USA Today.

“If you went to any bar tonight and said, ‘What’s this day about?’, they would be clueless,” he said in an statement to the outlet this week. “And you couldn’t blame the alcohol consumption either.”

Tortolero makes a fair point. I know more than a few Anglo-Americans who have referred to the holiday as “Cinco de Drink-o” (not great) without knowing why the heck they are partying in the first place. To find out why we celebrate Cinco de Mayo in the first place, you need to go back 154 years. So settle down for a history lesson, kids.

Cinco de Mayo is not, contrary to popular opinion, Mexico’s independence day, which actually falls on September 16. The May 5 celebration commemorates the Battle of Puebla in 1862 when the Mexican army defeated French forces.

In the middle of the 19th century, Mexico’s president Benito Juárez defaulted on the country’s war debts owed to European countries. So in January 1862, France, Britain, and Spain came across the ocean to collect what was due. Britain and Spain negotiated a truce with the Mexican government. France, lead by Napoleon III, stayed, apparently deciding to take advantage of the awesome tequila (and to, you know, seize all of Mexico for itself) which lead to the Franco-Mexican War (also called the Maximillian Affair or, more colorfully, the Mexican Adventure).

When 6,000 French troops set out to attack a small town in east-central Mexico, Puebla de Los Angeles, Juárez gathered a ragtag troop of 2,000 men to fortify the city against the croissant-eaters’ assault. The Mexicans at Puebla were incredibly outnumbered and poorly supplied but on May 5 when the French attacked, the Mexican army defeated them. The French lost nearly 500 men but fewer than 100 Mexicans had been killed during a battle that lasted from sunrise to sunset. Although not a major battle in the strategic sense (it took France six years and U.S. intervention to finally withdraw), the unlikely victory during the Battle of Puebla had such symbolic meaning to the Mexican government that it has remained in the public consciousness more than a century and a half later.

Truth time: Today, Cinco de Mayo is more of an American holiday than a Mexican one, though it is observed in the Mexican state of Puebla, the site of the original battle. Traditional Mexican festivities include military parades and recreations of the battle. For many, the day is like any other because it is not a federal holiday, so banks and offices remain open.

Cinco de Mayo in the United States is more a celebration of Mexican heritage and culture, especially in regions with significant Mexican-American populations. In the 1960s, Chicano activists cultivated a public awareness of Cinco de Mayo, in part because they identified with the victorious indigenous Mexicans’ battle against their European aggressors. For Tortolero, the holiday serves as a reminder of the many times Mexico has been invaded by foreign nations. “This one day,” he said, “Mexico won the battle.”

But, according to professor of ethnic studies at Washington State University José Alamillo, the holiday has morphed from a nationalist remembrance to a bicultural celebration of the Mexican-American identity. In an interview with National Geographic, Alamillo suggests May 5 can function as a bridge between Mexican and American culture. “It [allows] for Anglo-Americans to partake in and learn about Mexican culture through Cinco de Mayo," he said.

To many Mexican-Americans, Cinco de Mayo is about pride in one’s heritage. Robert Con Davis-Undiano, professor of Chicano studies at the University of Oklahoma in Norman, told National Geographic that the Battle of Pueblo is indicative of Mexican perseverance. “As a community we are tough and committed, and we believe that we can prevail. That was the attitude of the ragtag Mexican troops who faced and defeated the French in Puebla,” he said. The meaning behind the holiday is accessibly to everyone, Con Davis-Undiano added. “Mexican Americans, other Latinos, and literally everyone can feel proud and motivated by that message.”

Unfortunately, in some cities, Cinco de Mayo has devolved into a raucous drinking fest. Alamillo says that because of this, Cinco de Mayo is now celebrated by more people than ever in the United States. “It’s definitely becoming more popular than St. Patrick’s Day,” he said referring to another one of America’s favorite booze-based holidays.

It’s a time for bevies of non-Hispanic Americans to throw their own “fiestas”, complete with burritos, guacamole, piñatas, and offensive costumes based on Mexican stereotypes (seriously with the poncho and sombrero?). Certainly, walking through many a college town, May 5 seems like just an excuse for binge drinking and cultural appropriation.

In a USA Today article, Mexican-American Dani Marrero Hi offers up four things non-Hispanic Americans, or “gringos,” should avoid doing during Cinco de Mayo. My favorite one from Marrero Hi’s list is to “stop calling Guacamole ‘guac’.” She explains that the word “guacamole” “comes from the indigenous Nahuatl language.”

“So please make the effort to pronounce it in its entirety,” she asks.

(Fun fact: According to Toltec legend, the recipe for guacamole came from one of their gods called Quezacoatl, which just confirms what we always thought: guacamole is literally a God-given gift.)

Since the 1980s, Cinco de Mayo has also become incredibly commercialized. As Cinco de Mayo transformed into the booze-orientated holiday it is today, American corporations, particularly those selling liquor and beer, were eager to capitalize on the emerging Hispanic-American population, according to Alamillo. “It’s not just the large number of Hispanics, but also that it’s a very young population that is particularly receptive to advertisers,” he said. “Cinco de Mayo became a vehicle to tap into that market.”

When May 5 comes around this year, take a minute away from your frozen marg and consider the history behind this ever-changing holiday. How it came from Mexico’s fervent desire for continued independence and became a holiday celebrating Mexican heritage and America’s close connection with our neighbors south of the border.