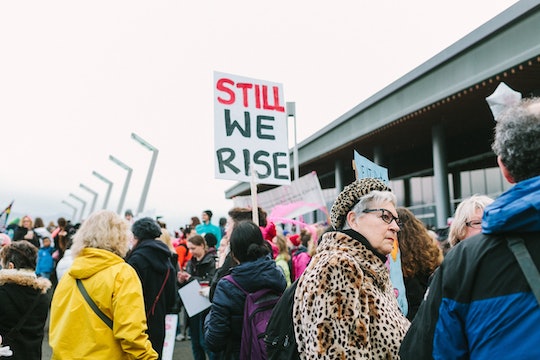 The 2017 Theme For International Women's Day

For more than 100 years, people across the world have come together on March 8 to celebrate the social, economic, cultural, and political achievement of women. The idea for this celebration was sparked in 1908 when 15,000 women marched through the streets of New York City demanding shorter work hours, better pay, and the right to vote. The concept of National Woman's Day spread to other nations and soon became International Women's Day. The holiday been observed on March 8 since 1913, and each year the organizers behind International Womens Day announce a theme for the annual celebration. So what is the International Women's Day Theme for 2017?

Appropriate for the current political climate, the International Women's Day theme for 2017 is #BeBoldForChange. Supporters are implored to challenge gender bias and inequality, campaign against violence, forge women's advancement, celebrate women's achievements, and champion women's education. This is a theme that will resonate with many people who have come together in protest this year and have marched for change and gender parity.

In 2016, International Women's Day hosted the #PledgeForParity campaign which committed to help women and girls achieve their ambitions and challenge their own bias. It called for gender balanced leadership, valuing contributions equally regardless of gender, and encouraged the creation of inclusive flexible cultures in society.

The site notedthat International Women's Day is an official holiday in many countries and several organizations around the globe have celebrated the event with their own women-empowering themes throughout the years. The official United Nations theme for International Women's Day in 2017 is “Women in the Changing World of Work: Planet 50-50 by 2030”, where the goal is to accelerate the UN's 2030 Agenda of achieving gender equality and empowerment for all women and girls, ensuring inclusive and quality education for all, and promoting lifelong learning.

International Women's Day 2017 also coincides with with “A Day Without A Woman,” a strike planned by the organizers of the Women’s March on Washington. Women can join the strike by taking the day off from paid and unpaid labor, if feasible. They can avoid shopping for the day with the exception of small, women- and minority-owned businesses. They can also wear the color red in solidarity with "A Day Without A Woman."

Needless to say, this International Women's Day will be one for the history books.