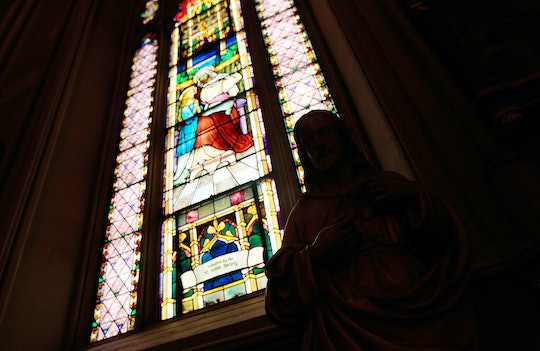 ‘The Keepers’ Is Netflix's Next 'Making A Murderer'

For anyone who watched and loved Netflix's Making a Murderer back in 2015, its new series, The Keepers, will probably intrigue fans of the previous series just as much. But what is The Keepers, Netflix's next Making a Murderer, which premieres in about a month? At the very least, it's probably another hit series for the streaming service, just waiting in the new release wings.

Refinery29 reported that The Keepers is a docu-series following the unsolved, mysterious murder of a nun in Baltimore, Maryland, in November 1969. Vanity Fair reported that the premiere date for The Keepers is May 19, and it’s directed by Ryan White, who previously directed The Case Against 8 and 2016’s Serena. That outlet reported that, according to Netflix, the series “will have everyone asking the question 'who killed Sister Cathy?’"

Vanity Fair reported that the tagline might imply that the new series will investigate the case of Sister Cathy Cesnik, a Baltimore nun whose unsolved murder could be connected to a church sex-abuse scandal. Refinery29 reported that — though she was killed in 1969 and her body found in 1970 — 50 years after her passing, officials are now making strides towards solving the mystery and finding Sister Cathy's killer.

The new true crime series about the murder of the 26-year-old nun was announced Monday, according to the International Business Times. Some speculate that the attack might have been covered up by the Catholic Church. That outlet reported that, in the 1990s, an anonymous woman who was a former English student of Sister Cathy's at Archbishop Keough High School claimed she was sexually abused by the Catholic school’s priest. The school's chaplain was reportedly also a suspect at some point during the investigation.

That woman, the International Business Times reported, also said she was taken to Sister Cathy’s dead body and told, “See what happens when you say bad things about people.”

The outlet reported that the documentary will include interviews from journalists, government officials, and friends and relatives of Sister Cathy's, hoping to find out what happened to her all those years ago.

Refinery29 reported that the police only recently started receiving extremely important information in regards to the investigation, because many of Sister Cathy's friends and peers were scared into silence when she was killed. And since officials might be closer than ever to solving the murder, according to that outlet, the release of the series is incredibly well-timed.

Hollywood Life reported that the series will have seven episodes, all released on the same date. According to Hollywood Life, a man named Louis George “Bud” Roemer, a retired homicide detective formerly with the Baltimore County Police Department who did work on the case, is also involved with the series.

Vogue reported that the show, "promises an exhaustive deep dive into the old investigation." It will feature interviews with everyone from friends to relatives, journalists to government officials, as well as Baltimore citizens who want the truth of Sister Cathy's death to come to light.