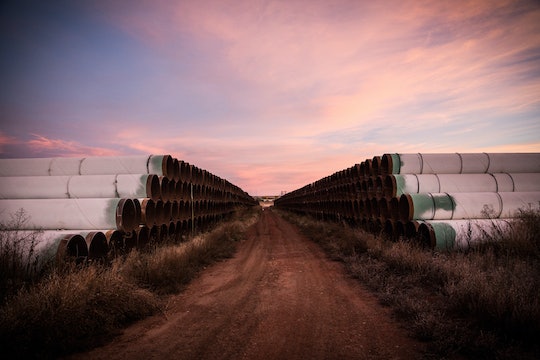 About Trump & The Keystone XL Pipeline

As much as Donald Trump is somewhat failing to follow through on many of the promises he made during his campaign, he's also succeeding in undoing many of President Obama's most impactful actions. Already, President Trump has signed executive orders to remove the United States from the Trans Pacific Partnership, enact a federal hiring freeze, and stop overseas funding for abortions (which, as a reminder, isn't actually happening, due to the Helms Amendment). Most recently, he's approved continued drilling for the Dakota Access pipeline and Keystone XL pipeline. While executive orders aren't exactly as powerful as they sound, and don't magically force themselves into action, they do still set a precedent for the president's intentions, and put into motion the necessary steps to achieve the intended goal. And while many are familiar with the Dakota Access Pipeline, the Keystone XL pipeline has flown more under that radar in the general public discussion of late, leaving some to wonder what the Keystone XL pipeline actually is, and why Trump wants to reinstate it.

In his latest executive order, Trump ensured that both projects would be renegotiated and closely looked at in order to move forward in the most efficient way possible. However, the Keystone KL pipeline project was shut down in 2015 due to numerous environmental concerns. Of course, Trump is convinced that he can make it work, and what's more, make a profit off of it, and now that he has the power to do so, he's pressing forward in whatever way he can.

Like many pipelines, the Keystone XL Pipeline — the portion of the Keystone line that descends from Canada and through the United States — has been widely contested amongst scientists and environmentalists alike because of its involvement with crude. The proposed pipeline would be a "planned 1,179-mile (1,897km) pipeline running from the oil sands of Alberta, Canada, to Steele City, Nebraska, where it would join an existing pipe," according to BBC. The pipeline's capacity would be about 830,000 barrels of oil every day.

According to Trump, moving forward with the Keystone XL Pipeline would add thousands of jobs to the American workforce, and lower the price of oil for consumers.

However, there's more than one reason Obama and activists were so adamantly against the Keystone XL Pipeline: Because the oil transported to Texas refineries along the pipeline would be crude, the environmental impact is more severe. And as for jobs, those who oppose the pipeline argue that they are only temporary, and that the pipeline isn't a permanent fix.

Of course, nothing will happen right away, but Trump's latest executive order makes it very clear where the new president stands on the environment, and that he isn't afraid to take action in order to make his mark.