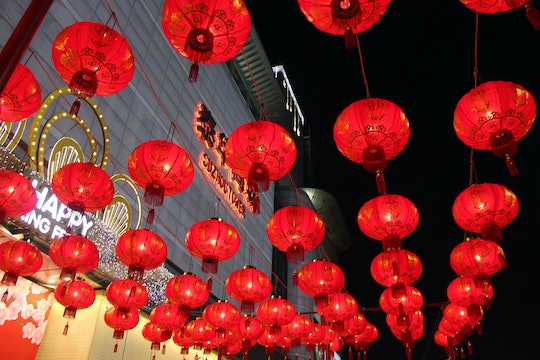 If you’ve already slipped up on your New Year’s resolutions, don’t worry, because the universe is going to give you a second chance. This week marks the beginning of the Chinese New Year and along with resetting your resolutions, you can enjoy all the beautiful artistry and traditions that come with it. The festivities will continue for days, ending with a beautiful celebration of lanterns. So, if you’re enamored by these gorgeous lights, you might want to know, what is the Lantern Festival?

For some historical perspective, Romper reached out to diversity expert Farhat Khan, who served as director of the Multicultural Resource Center for Chicago Public Schools. Khan says that the Chinese Lantern Festival, sometimes also referred to as the Spring Lantern Festival, is celebrated on the 15th day of the Chinese Lunar New Year, around the time the first full moon is visible. She says that traditionally people go outdoors to celebrate, while they eat festive meals under the moonlight, sending up lanterns to celebrate.

The Lantern Festival has been celebrated for over 2,000 years, from the time of the Han Dynasty, explains Khan, and was initiated by Emperor Ming of Han. “Lighting lanterns on this day was a tradition of Buddhist Monks,” says Khan, “and the Emperor adopted this festival, which eventually spread throughout China.” She says traditionally, people would light lanterns at the royal palaces, at their homes, and at their temples in the evening, sending beautiful lights up to the night sky.

This spring celebration, marked by the full moon, is all about hope and a fresh start. According to the South China Morning Post, when people light and release lanterns during the festival, it symbolizes a freedom from your past self while looking towards a new beginning, but it can also be a sign of hope for a budding romance. The Lantern Festival is also known as Chinese Valentine’s Day, the article explained, because traditionally it gave unmarried women the chance to go out unchaperoned so they would have the opportunity to meet and mingle with potential love interests.

Along with celebrating all that symbolism and hope, you can also enjoy some pretty amazing treats during the festivities. The Chinese Lantern Festival is also known as the Yuan Xiao Festival, explained Travel China Guide, and almost every family eats stuffed rice balls called yuanxiao (or tang yuan) on that day. Yuanxiao are round, symbolizing family unity and wholeness, explained China Daily, and are usually filled sweet or savory fillings, varying from region to region.

Another cool tradition of the Lantern Festival is the game of solving “lantern riddles”. According to The Epoch Times, people write riddles on paper and attach them to the lanterns. The riddles allow families to participate in a fun activity together, while promoting language and problem-solving skills, the article noted, and many of the classic riddles involve Chinese history, references, geographical places, and important figures from their culture.

The festivities are celebrated with food, family, lanterns, lights, fireworks, and the beautiful artistry of lion dance. Sifu Fazil Zafar, founder and head instructor at Hoi Fa Siu Lum Southern Shaolin Kung Fu Academy, who has been performing and teaching lion dancing for over 20 years, tells Romper that there is more to lion dancing than just a colorful performance. “Lion dance is a tradition that adds fun to the festival,” says Zafar, “but it's main purpose is to disperse evil spirits and bring good fortune to those who celebrate.” He adds that the lions symbolize strength and protection, adding to the hope of prosperity and health for new year.

Many cultures around the world celebrate new beginnings, and The Chinese Lantern Festival is one of the most beautiful. This year, the festival will take place on Friday, March 2, so if you are hoping to get a fresh start for a brighter future, get your lanterns ready, and bring your resolutions, too.

More Like This
Teacher Shot By 6-Year-Old Student Told School He Had A Gun, Was Told To "Wait"
The 10 Coolest Things NASA’s Webb Telescope Has Seen So Far
Why Your Vagina Smells Like Fish & What To Do About It
22 Valentine's Day Pregnancy Announcement Ideas Sweeter Than Candy