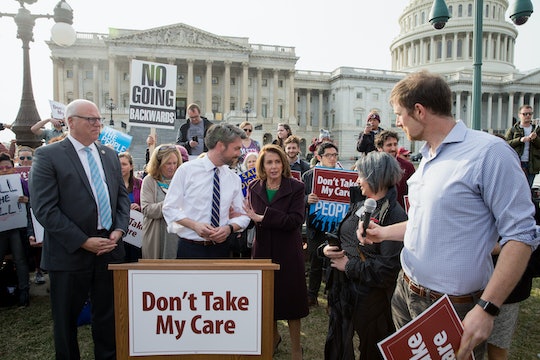 What Is The MacArthur Amendment?

As Republicans in Congress scramble to come together on a health care plan, one amendment is on everyone's mind. The MacArthur amendment to the American Health Care Act might be just the thing to win support from hard-line conservatives. But it could also cost the bill more moderate support and it's making a lot of Americans very concerned about their coverage, particularly as it relates to pre-existing conditions.

The amendment in question was proposed by New Jersey Rep. Tom MacArthur, with the aim of giving more power to the states. What it boils down to is an allowance for states to seek waivers for some requirements put in place by the Affordable Care Act. According to Politifact, one requirement that could be waived is the "essential health benefits" provision. Instead, under the MacArthur amendment, individual states could dictate what kinds of benefits insurance companies had to cover, from maternal care to mental health.

But the part of the amendment that's drawing the most fire, and confusion, is that it permits insurance companies to take into account the "health status" of an individual who has experienced a gap in coverage when setting new premiums. Critics have pointed out that it sounds a whole lot like setting higher costs for people with pre-existing conditions, while the so-called MacArthur amendment itself states,

Nothing in this Act shall be construed as permitting insurers to limit access to health coverage for individuals with pre-existing conditions.

However, it is unclear exactly what those high-risk pools would look like, or how effective they would be. As the American Medical Association said in a letter opposing the amendment, there's "no certainty" that the provisions put forth "will be sufficient to provide for affordable health insurance or prevent discrimination against individuals with certain high-cost medical conditions."

And that means that, while the MacArthur amendment has won the approval of the House Freedom Caucus, the ultra-conservative group of House Republicans who torpedoed the last attempt at a health care bill, more moderate Republicans have started pulling their support.

Hey, when even Jimmy Kimmel comes out with a tearful monologue against you, maybe it's time to start looking at some new options.