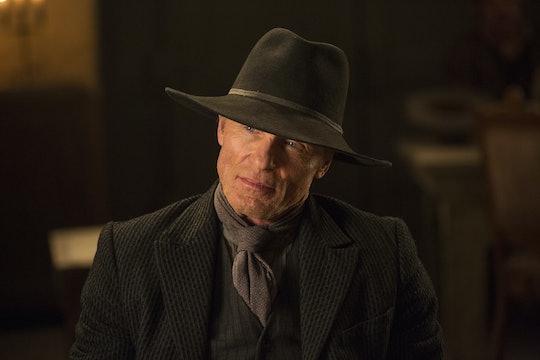 What Is The Man In Black's Name On 'Westworld'? William Could Hold The Answer

Even though Westworld is only in it's first season, it already has enough fan theories to rival that of Game of Thrones. In the first five episodes alone, fans have been left with a multitude of questions. What is Bernard's plan for Dolores? What (and where) is the maze? Did Arnold really kill himself or is he alive in the park somewhere? And, perhaps most importantly, what is the Man in Black's real name on Westworld? From what viewers can tell, it would appear that whoever the Man in Black is in the real world, he has an important (and evidently, high-paying) job since he can afford to come to the park so frequently. But as he told one of the other guests that dared tried to thank him for helping his sister, the Man in Black just wants to play the game with no distractions.

Keeping his name a secret in Westworld is probably the Man in Black's way of trying to distance himself from who he is out in the real world. (Can you imagine if he turned out to be a kind elementary school teacher or something?) However, the Man in Black's name may also be a secret because it could end up proving the popular theory that there's actually two different timelines occurring on Westworld — one in the past and one in the present day.

The idea is that what's happening with William and Logan is actually occurring in the past — around 30 years ago, to be exact — while everything else with Maeve and Robert and the Man in Black are all taking place in the present day. There's a lot of speculations that have stemmed from this multiple timelines theory, but the main one involves William's possible connection to the Man in Black. The theory predicts that the two characters are actually the same person. William is simply a younger version, prior to his transformation into the villain viewers have come to know.

When William first arrived in Westworld, he chose to wear a white hat, opting to take the "good" route in the game, rather than become a villain. However, on last Sunday's episode it seems William is turning more and more to the dark side. Although he promised Dolores he wouldn't kill any of the Union soldiers, he ended up murdering every single one of them. To be fair, it was a kill or be killed type of situation. But still, it could be the catalyst that sends him further away from the path of good. The Man in Black has no qualms about shooting someone on the spot. Maybe this was how that habit got started.

Additionally, William almost got into a fight with Logan and then turned his back on him while he was getting beaten, possibly to death, by angry hosts after El Lazo (aka Lawrence) double crossed them. Sure, William hasn't done anything particularly "evil" yet (Logan was getting pretty annoying anyway), but his character definitely seems to be changing and maybe not for the better.

Though he was at first hesitant to kill the hosts, he can now kill them without hesitation, something the Man in Black has been doing from the start of the show. Plus, William's budding relationship with Dolores is worth noting since the Man in Black pointed out how Dolores still didn't remember him in the first episode even though he's been coming there for 30 years.

Of course this could just be a coincidence, but it seems interesting that both Dolores and the Man in Black are looking for the maze and we haven't seen these two together since the first episode of the show. Maybe Dolores tells William about the maze, but something happens and they fail. Then William starts coming back again and again, trying to finish what he and Dolores started, eventually becoming the Man in Black.

With Westworld anything is possible. We'll just have to keep watching to see if the truth about the Man in Black is ever revealed.