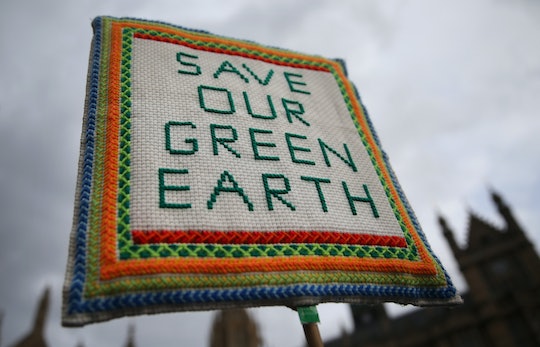 What Is The March For Science?

In January, just one day after President Donald Trump took office, millions of protestors, all around the world, marched in solidarity with one another, standing up for the rights of women and to let politicians know that they would not be silenced. What resulted from this was a clear message through record breaking numbers. But this weekend, there's a new march in town. Some people might want to know what is the March for Science before joining protestors for a very worthy cause.

People all across the world are expected to gather in various locations and do exactly what the march's title says — march for the sake of science. It's only fitting that the March for Science is held on the designated day to appreciate this planet, Earth Day, or Saturday, April 22. The March for Science, according to NBC News, was inspired by the success of the Women's March on Washington, and organizers are hoping for similar results. As they should — according to NBC News, there is one major march planned in Washington D.C. (tens of thousands of people are expected to show up, according to the Washington Post) and 609 satellite marches planned all around the world. It's quite likely that there's a march in your own city or state, which can be located on the March for Science's website. This march gives science, in all of its importance, a chance to shine and be the center of conversation, if only for a day.

But what exactly is the purpose for this March For Science? Protestors are hoping to bring attention to the importance of science's role in life — from medicine to the environment, according to NBC News. During a time where the president's proposed budget brings significant cuts to funding and science research, there has never been a more important moment to march for science (even if the march is trying to remain non-partisan).

Not only does the march aim to bring attention to this, march organizers also hope to accomplish a list of goals outlined on the march's website: to humanize science, to partner with the public, to advocate for science, to support other scientists, and to reiterate science's role in society.

Scientists from all walks of life — from pediatricians to researchers — and people who simply care about our environment will participate in the march, according to the Washington Post. But a march like this is unexpected for scientists, according to PBS News Hour, farmers are more likely to protest than scientists have for the past 50 years. But with the extreme proposed budget cuts and the current presidential administration's history of denying climate change, it's no wonder why scientists would want to speak up and gather for one of the few and rare times.

While the March for Science has been critiqued for its lack of direction, according to The Atlantic, one thing is certain: science matters. People, especially politicians, need to know this. This is why scientists and their supporters are gathering Saturday to emphasize science's role in society and collectively speak up about it.

There has never been a more important time to advocate for science.