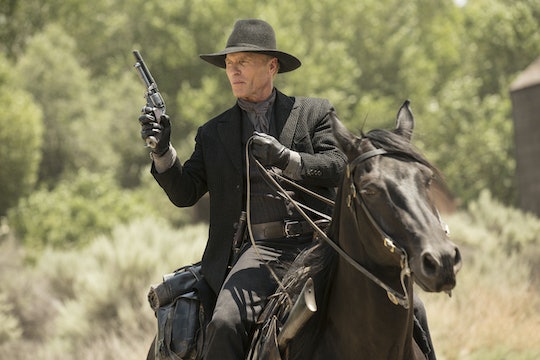 What Is The Maze On 'Westworld'? The Man In Black Is Intent On Finding It

The first episode of Westworld introduced a ton of intriguing concepts and storylines up front. But perhaps the most mysterious hint was the scalp map, revealed by The Man in Black ("MiB") near the end of the pilot after he scalped Kissy, the Native American saloon dealer. "Chestnut," the second installment of the season, partially focused on MiB and his quest to find the entrance to the maze. Because Westworld isn't keen on giving us easy answers, we're left with so many questions. Why does MiB want to find the maze? And, most importantly, what is the maze on Westworld?

When he was introduced in the pilot, it quickly became apparent that MiB is a ruthless bad guy, a long-standing patron of Westworld with a penchant for rape, murder, and general debauchery. He interacted and spoke with Dolores (and several other hosts) in a way that suggested he had been "acquainted" with them for years – 30 years (the precise amount of time that MiB claims to have been coming to the park) to be exact. It's also insinuated that all of these shocking and illegal acts have been rote and "par for the course" for the black-hatted villain – when he kills Dolores family and Teddy in the pilot, he tells her that he wants her to fight against him. Chilling.

Apparently, MiB has grown bored with the traditional "violent delights" that Westworld offers its human guests and is now ready for something bigger, better, and more intense – the maze. Recall that, after brutalizing Dolores in the opening of the episode, in the second half he "apologized" to her and explained he had "other plans" that night – plans that involved discovering this "maze," instead of sexually assaulting Dolores yet again. In the second episode, MiB turned his attention fully towards the matter of the maze.

After torturing a robotic man named Lawrence – a man that, like Dolores, MiB appeared to have been well-acquainted with over a number of years – by threatening his family, and killing his men and his wife, Lawrence's daughter gave him a very mysterious, vague clue. She first warned him off, telling him that the maze "isn't for him," but, after MiB pushed her on it, told him that to find the entrance he needed to follow "the blood arroyo to where the snake lays its eggs."

There's a whole lot to unpack here. Right off the bat, a preliminary guess would be that the "maze" is some kind of next-level activity available only to Westworld's most senior/valuable "customers" – say, for example, a guest who had poured a ton of money into the park by visiting it consistently for three decades. It makes sense, too – really how much rape and pillage could possibly be enjoyable (for thirty years) before you start looking for something else to do in the robot-populated park? Plus, we've already gotten confirmation that MiB has certain "special privileges" – Stubbs, the Westworld Head of Security, told an employee who was concerned about "a guest who took out a whole posse" (aka, MiB), that "that gentleman gets whatever he wants." Including, I suppose, access to the maze.

Does MiB get whatever he wants because of his long-standing patronage? Is there some other requirement for reaching this level of park admission? Who knows. Regardless, for whatever reason, MiB was able to "access" the clue from the robotic little girl, though it's unclear exactly what he did that allowed her to "access" the clue information. Also unclear: does every robot have that maze map etched into their scalp and subconscious access to maze clues? Or only a select few? If the latter, how exactly did MiB know to scalp Kissy and go after Lawrence's daughter, specifically?

We have a few clues suggesting what the nature of the maze might be. MiB's maze quest seems to be sanctioned by the Westworld employees; Stubbs, at least, seemed to have an idea of what he was doing. The MiB also had one, incredibly cryptic line, after he learned where he could find the maze. He said he's "never going back" – presumably to the "real world," which he previously ragged on for being too "chaotic," much unlike the ordered existence of Westworld.

This seems to hint that the maze offers some way to stay in Westworld forever – but how could it possibly do that? We'll just have to keep tuning in to find out.