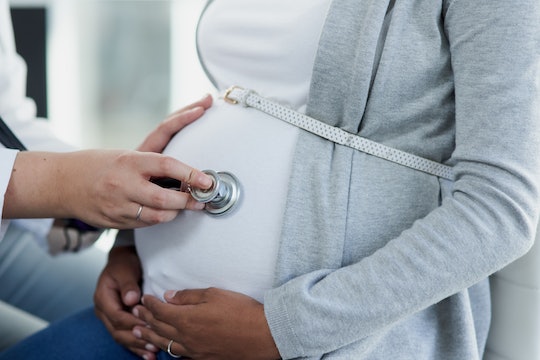 What Is The Miscarriage Window?

For me, the worry of miscarrying was one that set in soon after that stick I peed on showed me two bright pink lines. My husband and I had been trying for months to get pregnant, but once it was actually happening, the opportunity for pure joy and excitement was overshadowed by waiting out the dreaded miscarriage window. What is the miscarriage window? I'm glad you asked, because I think it's time things were cleared up on this subject to give newly pregnant women a chance to embrace all the good feels, and not be so preoccupied with possible problems.

According to the American Pregnancy Association (APA), "miscarriage is a term used for a pregnancy that ends on its own, within the first 20 weeks of gestation," meaning that until you cross over that mark, your pregnancy falls in the miscarriage window. Although the span is 20 weeks, the majority of women will miscarry by the twelfth week of gestation, reported Mayo Clinic. These first 12 weeks can be an emotional time for pregnant women — what with all the hormonal changes, morning sickness, and fatigue — not to mention the added stress of worrying weather or not they will suffer a miscarriage.

Although this is a valid concern, the APA pointed out that only 10 to 25 percent of pregnancies will end in miscarriage. If you don't like the sound of those odds, consider this piece of information from Women's Health Nurse Practitioner, Ashley Moss, who said, "when you have an ultrasound at 10 weeks that measures appropriately for the women's last menstrual period, the woman has approximately 95 percent chance of having a baby at full term." This number should provide some comfort to those who may be concerned about the possibility of miscarriage.

While navigating through these first weeks, when the risk of miscarriage looms, it's important for women to know the signs and symptoms. But here's where it get confusing, because some signs of miscarriage are also harmless symptoms that come along with pregnancy.

For example, as Parents pointed out, that while bleeding is the most common sign of miscarriage, many women also have different levels of bleeding early on in their pregnancy. Along the same lines, abdominal cramping can mean miscarriage, but is also common to pregnancy, due to your ligaments stretching to make way for your growing belly, according to Parenting magazine.

Although the majority of miscarriages are believed to be caused by chromosomal issues in the developing fetus, the U.S. National Library of Medicine pointed out some factors that have been linked to a greater risk of miscarriage. These possible causes include drug and alcohol abuse, obesity, smoking, and hormonal problems. It is considered good prenatal health to avoid as many of these risk factors as possible, not only in the miscarriage window, but throughout pregnancy.

Discovering your pregnant should be a time of celebration, yet it seems hard to allow yourself you get into the spirit when you feel like you need to wait out the window of time when miscarriages occur. My hope is that newly pregnant women can learn the facts about miscarriage and try to focus on the positives that come with growing a new life, and not put too much energy into that one big fat negative. Although you may still proceed with caution, please know that miscarriage is one of those things that is beyond your control, so you may as well choose to enjoy each step of the experience.