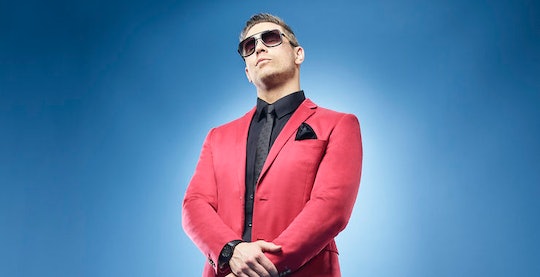 The Miz Gets Real On His New Show

If you love Total Divas and Total Bellas, you're going to love USA's new docuseries, Miz & Mrs. The new series follows WWE superstar couple The Miz and Maryse Ouellet. Although most people know The Miz by his stage name, you may want to know what The Miz's real name is.

The Miz's real name is Mike Mizanin and, as you can probably guess, his stage name came from his last name. If you're unfamiliar with The Miz, he's been a part of the WWE since the early 2000s. He's a former WWE Champion, an eight-time Intercontinental Champion, and a six-time tag team-champion. Outside of the ring, The Miz has made name for himself in Hollywood, starring in a few films, including succeeding fellow WWE star John Cena as the star of The Marine franchise. He's also had some small roles on TV shows like Sirens and Supernatural.

The Miz also has a new name: Dad. His wife, Maryse, gave birth to their daughter, Monroe, in April of this year and now the pair are enjoying first time parenthood together. Their docuseries will follow them as they go on this new journey together, and also give a closer look into their private lives and their family.

Although Maryse had to step out of the ring when she became pregnant, she's still a household name in the WWE world, and for good reason. She's a former WWE Divas Champion, and as a couple she and The Miz tangled with Cena and Nikki Bella at WrestleMania 33. The Miz and Maryse remained one of the company's top villains, until Maryse had to take a break.

Since Maryse only gave birth a few months ago, fans shouldn't expect Maryse to return to the ring anytime soon. In an interview with CBS Boston she said that she's not sure when she will return to the ring, and right now she's just focused on being mother, which isn't conducive to an extensive travel schedule that would require her to be away from home for a weeks at a time. Still, that doesn't mean she won't ever return. It just means not yet.

Although Maryse is staying home for now, The Miz has gotten back into the ring since the birth of his little girl, but he keeps in touch through FaceTime. In an interview on People Now, The Miz explained that sometimes he'll be on FaceTime in his gear before going out for WWE, talking to his little girl. So cute!

In addition to being back at work, The Miz recently took a break from daddy duties to play in the MLB All-Star Game recently. This won't be a part of the show, however, since it happened so recently. Instead, the show will give viewers a look into The Miz and Maryse's lives, starting with Maryse's pregnancy to Monroe's birth and onward. Specifically, one of the biggest plot points of the series will be the couple move from Los Angeles to Austin, Texas, which both The Miz and Maryse agree probably wasn't the best idea since Monroe was so young at the time.

"She was 2 weeks old, and we had to move from L.A. to Austin on a tour bus, and we had 24 hours to do it," Maryse explained during their appearance on People Now. The Miz added, "Two dogs, two cats ... The best advice I can do is don't do that. Don't have a kid, and then two weeks later move to Austin because it doesn't work. It makes for a funny TV show. It was fun for you guys. It wasn't fun for us."