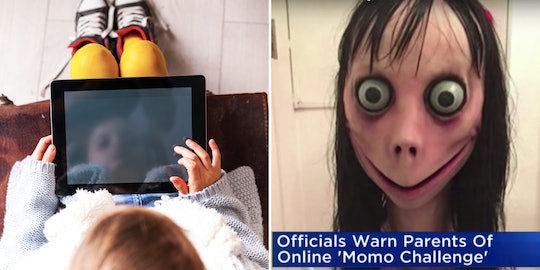 Here's What Parents Need To Know About The Disturbing "Momo Challenge"

Warning: This article contains information about suicide and self-harm, which some may find triggering.

Despite near constant warnings about the potential negative effects of screen time, the reality for most parents is that tablets and TVs are often a regular part of family life. While games like Fortnite and apps like YouTube Kids may be a bit hit among school-aged children, they may also be leaving them vulnerable to dangerous content — including what appears to be a recent resurgence of the disturbing online trend called the "Momo Challenge."

Parents may recall that the online "game" made headlines last summer, CBS News reported, as it emerged that children were contacting strangers claiming to be "Momo" via WhatsApp. Once they were contacted, according to CBS News, kids were being sent disturbing messages and images, encouraged to engage in self-harm, and possibly even being told to commit suicide. WhatsApp told CBS News that the company "cares deeply about the safety of our users" and "It's easy to block any phone number and we encourage users to report problematic messages to us so we can take action."

The challenge seemed to quickly disappear, but now schools and police in the United Kingdom are warning parents to be aware that the Momo Challenge may be back, according to the BBC. In a recent Facebook post, the Police Service of Northern Ireland warned parents that this time, the Momo Challenge has been "[concealing] itself within other harmless looking games," and within videos on YouTube.

As a result, officers are advising parents "to supervise the games your kids play and be extremely mindful of the videos they are watching on YouTube," as well as to "ensure that the devices they have access to are restricted to age suitable content." After all, even if children aren't actually going ahead and trying to make contact with online strangers, the reality is that even the images and narratives related to the Momo Challenge are enough to cause nightmares.

Yet, as panic-inducing as the Momo Challenge naturally seems, that may not actually be what parents should be truly worried about. For one, the number of reported cases of children harming themselves because of the "game" is extremely low, according to Forbes, and it seems that it's largely a viral, disturbing hoax more than anything.

But the attention given to the Momo Challenge does raise an important point about online safety — particularly as it related to the reality of unsettling and inappropriate content on what are supposed to be outlets geared towards children.

For a number of years now, parents have spoken out about user-generated videos featuring popular children's characters, like Peppa Pig or DocMcStuffins, which at first glance appear to be child-friendly content, but involve concerning scenes of characters turning "evil," having their teeth drilled at the dentist, or having body parts cut off, according to a 2017 report by BBC Trending. As one British dad told the news outlet, he'd once saw an online episode he thought was Peppa Pig, only to realize the characters had "set fire to a house with one of the characters in it to try to kill them."

More recently Florida pediatrician, Dr. Free Hess has begun speaking out about concerning content on YouTube Kids. In July 2018, according to CNN, she'd found footage spliced in the middle of an otherwise-benign appearing cartoon that "gave children instructions on how to kill themselves" by cutting their wrists. While the video was ultimately removed, Hess told the outlet she actually found it again, on the main YouTube website, earlier this month.

If that weren't enough though, as she told CNN, Hess' own searches have since turned up other videos "glorifying not only suicide but sexual exploitation and abuse, human trafficking, gun violence and domestic violence," and that she also found a Minecraft-inspired video that "depicted a school shooting."

YouTube did not immediately respond to Romper's request for comment about the Momo Challenge, but it did issue a statement on Twitter. "We want to clear something up regarding the Momo Challenge: We’ve seen no recent evidence of videos promoting the Momo Challenge on YouTube. Videos encouraging harmful and dangerous challenges are against our policies," YouTube said in a tweet on Wednesday.

In a follow-up tweet, YouTube urged users to flag "videos including harmful or dangerous challenge" immediately. "These challenges are clearly against our Community Guidelines," YouTube said, linking to its guidelines on how to report inappropriate content.

We appreciate people drawing problematic content to our attention, and make it possible for anyone to flag a video. Flagged videos are manually reviewed 24/7 and any videos that don't belong in the app are removed. We’ve also been investing in new controls for parents including the ability to hand pick videos and channels in the app. We are making constant improvements to our systems and recognize there’s more work to do.

On Tuesday, CNET Senior Editor Bridget Carey spoke to WGN Radio about the ongoing concerns about the safety of children's content online, and said it's far too easy for parents and caregivers to accidentally expose their kids to inappropriate footage. Carey told WGN Radio that, thanks to the auto-play feature, kids can go from watching a totally benign cartoon, to watching something "that actually is kind of violent sometimes and gross," and that parents need to be more aware of how easily it happens.

Carey said in the same interview, "So often, you just put the phone up for a second to be like, 'oh, here's a nice nursery rhyme,' and you turn around, the babysitter turns around, the caregiver, whoever it is, grandma, grandpa, and the next video, auto-play, it still looks like a Mickey Mouse cartoon, it still looks like something safe from Disney, but it's not."

While it seems that YouTube and YouTube Kids definitely should be closely monitored, Carey suggested that a better strategy may just be to steer clear of YouTube entirely. Her solution? Offer up programs on Netflix you've pre-vetted, or download videos on a tablet that you know are safe, so you won't have to worry about any unsavory content coming on accidentally.

As awful as the Momo Challenge sounds, it's a good reminder of the importance of having an ongoing dialogue with older children about staying safe online, and about letting an adult know if they've come across anything that makes them upset or afraid. Perhaps most importantly though, it emphasizes the need to be aware of the content kids are being exposed to, and supervise their online activity.