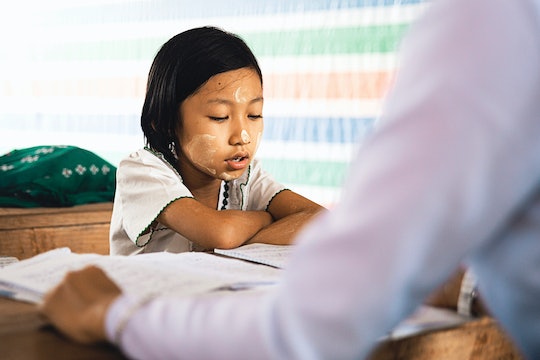 How The Montessori Method Affects A Kid's Development

With the school year coming to a close, many parents have started thinking about whether or not their child will be enrolled at the same school for the next year. One of my friends — who is a mother of two — revealed to me that she's enjoyed having her oldest child in private school, but is considering the Montessori Method of schooling for her youngest. Since I wasn't familiar with what this school technically was, I was left wondering what is the Montessori method and should I be considering it for my future kid, too?

According to the American Montessori Society, the Montessori Method is an educational approach that is child-centered and based on scientific observations from birth to adulthood. The method of teaching was developed by Dr. Maria Montessori — the first woman in Italy to become a physician — and has been around for more than 100 years. The Montessori Method focuses on developing a child's learning abilities through physical, emotional, social, and cognitive learning. Likewise, the unique method provides groupings that foster peer learning, uninterrupted blocks of work time, and guided choice of work activity, as noted in the aforementioned American Montessori Society article. The same article also mentioned that this method of learning encourages children to have independence, freedom within limits, and a sense of order.

The White Bear Montessori School noted that pros for utilizing the Montessori Method are hands-on learning in all subjects, children learning through playing at their own pace, catering to the child instead of the child catering to the lesson, and giving children the opportunity to explore what interests them instead of being forced to participate in things that don't. Additionally, Montessori students are said to have a high level of academic achievement and are taught real world skills.

Although the above pros to this method may be attractive to some, there are a few things that parents should note before jumping into using it or enrolling their child into a school that offers it. According to the White Bear Montessori School, those interested in finding a Montessori school for their child should know that not all public school districts offer a Montessori option. Additionally, many Montessori schools only teach children up to a certain age and standardized testing is not offered at many of the authentic schools. The International Montessori Index also noted that tuition for these types of school can be extremely expensive with prices starting at no less than $4,200 for infants.

If the steep price tag is deterring you from enrolling your child in a Montessori school, you can also teach portions of the method at home, according to The International Montessori Index. This can be accomplished by providing opportunities for independence to help build self-esteem and delivering options for them to participate in daily tasks like meal preparation, cleaning, clothing care, and more.

Ultimately, every parent has to decide what will be best for their own child, but ensuring that you are fully knowledgeable on what it encompasses is a good way to help make the decision.