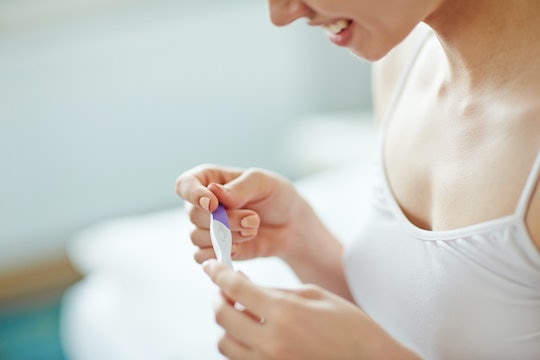 Here's Which Pregnancy Test Is Most Accurate

When your period is late, it's totally understandable to feel anxious. Whether you've been trying to conceive or not, you just want to find out if you're pregnant. So it makes sense to ask yourself — what is the most accurate pregnancy test? After all, you probably want to stop wondering and to start planning ahead. But the good news is that you have numerous options available to you and that you'll be able to get your results sooner rather than later.

There are two main types of pregnancy tests — a blood test and a urine test. Both tests work by detecting a hormone called human chorionic gonadotropin (hCG), which your placenta produces after the embryo attaches to the uterus, according to the American Pregnancy Association. Out of these two testing options, a blood test will cost more and must take place at a doctor's office, but it will be more accurate and can be administered sooner (around seven to 12 days from possible conception). "Urine tests are getting more accurate and detecting pregnancies sooner, but they've yet to achieve the accuracy of a blood test," Dr. Neil Foster, an OB-GYN based out of Leesburg, Virginia, tells Romper.

Before you pick up your pregnancy tests, keep in mind that timing plays a big part in the accuracy. You might get a false negative if you take a urine test too early after your missed period. For the best results, the Mayo Clinic suggested waiting a week after your missed period and taking the test right after you wake up in the morning (that's when your urine is at its most concentrated). And if you can't wait that long, make a doctor's appointment to take a blood test.

When you suspect that you may be pregnant, you might feel excited or scared or overwhelmed — maybe all at once. But thanks to advances in medical technology, you won't have to wait too long before you get your results, whether you take a pregnancy test at the doctor's office or within the comforts of your home.