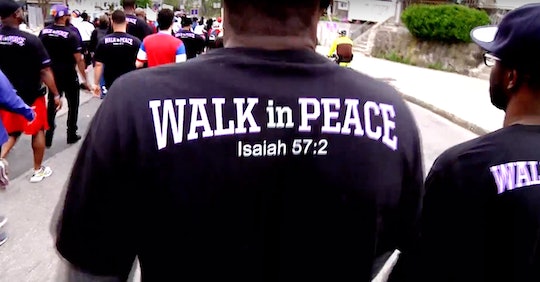 Much of the time, Mother's Day is an opportunity to celebrate moms — to pamper them, to thank them, to spend a day doing whatever it is they want to do. Other times, in an iteration of the holiday that can be more subdued and reflective, moms may take the day to remember the kids they've lost. And that's how the Mother's Day Walk for Peace, now a 21-year Boston tradition, got started. An annual event for family, friends, and community members to get together to "demand dignity and compassion for all families impacted by murder" and support constructive plans to discourage violence, the walk draws many marchers each Mother's Day.

The walk was founded on Mother's Day in 1996, when Clementina M. Chéry decided she was not going to privately grieve the public murder of her son — which had occurred more than two years prior— according to The Establishment. So Louis Brown's death in the crossfire of a shootout became more than a tragic event: It was the impetus for his mother to found the Louis D. Brown Peace Institute and rally her community.

In 2017, hundreds of people made the trek from Dorchester to City to raise awareness about the impact of homicide and advocate for the support of victim's families — as they had been doing for more than two decades.

One of the many reasons why the walk is so crucial in Boston and elsewhere is that it helps to bring mothers and families who are suffering out of the shadows, as Louisville Urban league president and CEO Sadiqa Reynolds told The Establishment:

Not only are [women who have lost children to violence] not acknowledged on Mother's Day, people won't talk about their child's death with them because there’s so much stigma around the way they died. There's no safe place for them to express pain ... The last thing you want is to feel like that death is in vain and it’s hard not to feel that when when life was snatched early, unnecessarily, and violently. For some women, if they can make something good or help someone else’s child, they want to do that.

Of course, the Mother's Day Walk for Peace is an emotional event each year, but it also has concrete goals. The walk has a 2017 fundraising goal of $400,000, and proceeds go to the Peace Institute, which works to train public health officials in Massachusetts and serves as a resource for those whom murder has affected.

This year, the institute's funding priorities include the Intergenerational Justice Program, which focuses on community engagement and family involvement to help both victims' and offenders' families; the Training and Technical Assistance Center, which provides resources to aid public health providers and institutional stakeholders in implementing "effective and equitable homicide response protocols"; and much more.

While the circumstances that preceded the walk are far, far from ideal, its goals are vital to bringing about a more peaceful and more equitable society — more importantly, it's shining a spotlight on those mothers who may not feel as if the day belongs to them, but who are entirely deserving.