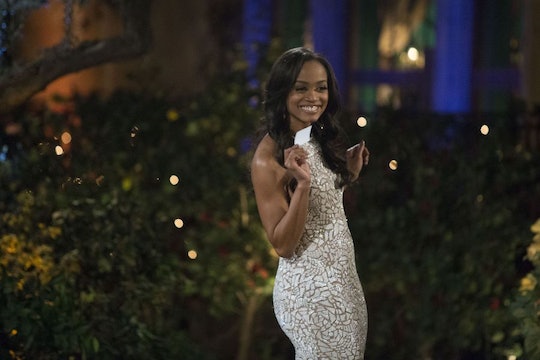 Rachel's Dog Stole The Show On 'The Bachelorette'

It's finally time for Rachel Lindsay's turn as The Bachelorette and her season already has some refreshing twists. For starters, she's obviously the first black Bachelor/Bachelorette in history, a trail she hopefully blazes to make way for much more diverse seasons to come. But also, in lieu of chatting with ex-Bachelorettes who stood where she is now, Rachel brought along her best friends from the Bachelor mansion last season to give her the customary pre-season pep talk. She also brought along another very important moral support buddy, but fans may be wondering: what is the name of Rachel's dog on The Bachelorette?

We see them romping around her room together during the season premiere, and it turns out that Rachel's pup is a huge part of her life. According to ABC's press release, "[Rachel's] future husband will need to be smart, funny, have a decent jump shot and be willing to compete for her attention with the two other men she holds dearly: her handsome nephew, Allister, and her adorable dog, Copper."

Copper Ash is a 2-year-old rescue dog who Rachel believes is a Finnish Spitz and German Shepherd mix. He's also extremely fluffy and cute, scientifically speaking. I guess that in addition to being willing to compete with Copper, her final rose recipient also has to love and take care of him. But look at this dog! He could melt even the ice cold heart of a cat person!

Viewers only caught a few brief glimpses of Copper during the two-hour premiere, first playing with Rachel in his new digs when they arrive at her private suite, and later watching over her from a nearby ottoman as she put on her gown for limo arrivals. But odds are he'll be showing up every so often throughout the season. (At least, I hope so.) Hopefully, Rachel only introduces truly worthy contestants to her canine companion.

Copper definitely seems like he'd be up for some beach dates, a picnic someplace with a dog park, or international adventure. He'd probably also do a great job of easing the tension on group dates, but honestly, who knows if he brought his passport along?

But truthfully, Copper is on The Bachelorette to help support Rachel through this process, and I'm sure it'll be really nice for her to have him around when she needs a snuggle after some particularly brutal eliminations. Here's hoping Copper features prominently in Rachel's proposal.