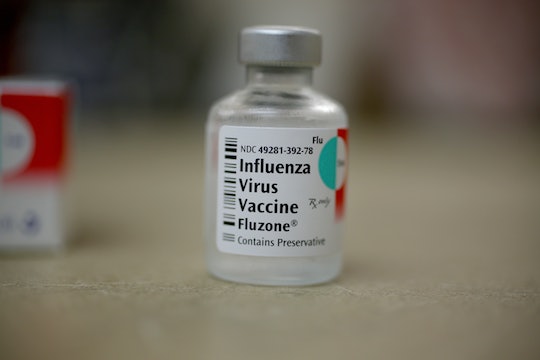 Just when you stopped having crippling panic attacks every time someone coughed near you out in public, you hear of a newer, funner, more hip version of the 2018 flu virus. If you're anything like me, and given the fact you're reading this, you likely are, you're a bit miffed and a little worried over rumblings of this "new flu." But what is the new flu? Is it a second wave of the original flu? A totally different strain? Oddly enough, it's not new at all. It's been lurking this whole time. Allow me to explain.

The idea that there is a new flu that's coming to invade our sinuses and drop us with fever is terrifying. Thankfully, the term "new flu" is a bit of a misnomer. What's being referred to as the "new flu" is just the manifestation of the flu B virus that's been circulating since the beginning of the season, noted the Centers for Disease Control and Prevention (CDC).

So named because it typically presents with more cases later in the season, flu B can be just as severe as flu A, and presents with the same devastating symptoms at diagnosis. According to the CDC, we are seeing a spike in flu B right now.

Last month, I contracted flu B. It was like being hit by a semi truck filled with nails and the Sandman's dust. My head was being held by an invisible vice that squeezed my temples at one million pounds per square inch. My fever was all over the place. I had no appetite. Even the idea of sitting back with a beer was abhorrent to me, and I love beer deeply.

When I went to see my doctor, hoping by some miracle it wasn't the flu and that it was just some freaky cold that had taken over my body, she barely had to look at me. "Flu," she said with all the matter-of-factness befitting her position. It wasn't until I got swabbed that I learned I was her first patient presenting with flu B. It turns out that my obsessive need to be early crosses over to what flu virus I contract as well.

What is the "new flu" in relation to flu A? According to the CDC, it's the late-season dominating virus that spikes just as flu A (this year, H3N2) begins to decline. As of this week's CDC report, a full 60 percent of new flu diagnoses are actually the flu B virus, or "new flu."

Don't let the timing fool you. It's every bit as deadly as flu A. Seeing as how flu A has killed adults and children, don't let your guard down just yet. As per the CDC, "Among hospitalized adults with flu A or B infection, length of hospital stay and the proportion of patients admitted into an Intensive Care Unit (ICU) were comparable. Results also showed that flu B virus infections caused a similar proportion of deaths as flu A virus infections among hospitalized adults during the study period."

There's an additional level of worry for parents concerning flu B. According to Future Science, "Influenza B viruses (IBVs) circulate annually along with influenza A (IAV) strains during seasonal epidemics. IBV can dominate influenza seasons and cause severe disease, particularly in children and adolescents." Because we didn't have enough to worry about already.

The CDC is still recommending the flu shot, as there are weeks left in the season. The best we can do to combat the flu is to prevent it. Wash your hands frequently. Avoid touching your nose, eyes, and mouth. Cough into your elbow and teach your children to do the same. Hopefully, we can stave off any more waves of virus.