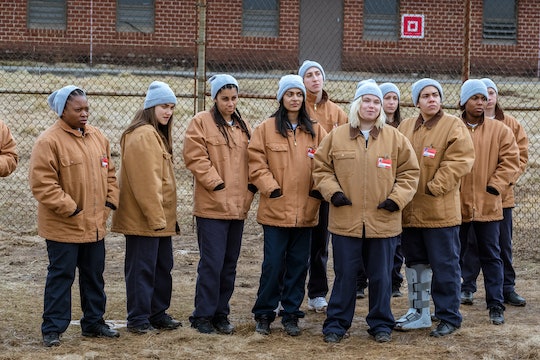 The Ladies Of 'OITNB' Are Moving Houe

Orange Is the New Black returns to Netflix this month, and given the sorry state Litchfield was left in after the three-day riot that spanned Season 5, fans tuning into new episodes may be wondering: what is the new prison on Orange is the New Black? Well, unfortunately, no one will be returning to Litchfield anytime soon. In the trailer, we see Suzanne begin to panic as she's ushered into her new digs, repeating over and over again, "This is not home." As a guard bluntly puts it: it is now. So what exactly happened?

Well, over the course of three days, the inmates of Litchfield totally trashed the minimum security facility. They burned their records. Ten inmates caused structural damage when they barricaded themselves inside a bunker in an old indoor pool, forcing a SWAT team to break in using explosives. And part of their protest was due to the fact that the old facility was so badly in need of repairs, it was basically uninhabitable to begin with. So, needless to say, Litchfield is closed for business, which is exactly what the inmates were hoping for. The rioters have subsequently been moved to "the Max," the ominous maximum security facility down the road mentioned on previous seasons.

Naturally, with an all new prison comes an all-new supporting cast of inmates, new commanding officers, and new rules. The inmates are forced to spend most of their time in tiny cells with one bunkmate, instead of the dormitory-style cell blocks they enjoyed in minimum security prison. Several suspected ring leaders of the riot are also held in solitary confinement. At one point in the trailer, we see Daya slumped over in a wire cage the size of a telephone booth. And maximum security prisons typically only give inmates one hour to spend outside, as opposed to the comparatively boundless time the women of Litchfield could spend in their outdoor space gardening, or doing other prison-sanctioned activities.

Apart from the official prison protocol, there's also, of course, an unofficial social order the ex-Litchfield inmates are forced to get the hang of. The new prison already has its own social ecosystem in place, and their old alliances and hierarchies are totally meaningless here. (Sorry, Red.) From the trailer we learn, for example, that the inmates' differently colored uniforms correlate to their place in the pecking order.

"Blues and khakis have beef with each other. Pinks are safe out there," Piper reassures a frightened, pink-uniformed Suzanne in the trailer. Meanwhile, inmates in the aforementioned blue and khaki have an all-out brawl in the yard, barely contained by commanding officers on the scene. Warring cell blocks apparently have a longstanding feud, which the women of Litchfield have inadvertently found themselves a party to. Of course, they have their own problems to sort through (like getting their stories about the riots straight to mitigate their punishments), and not being allowed to talk to each other across uniform color lines isn't making things any easier. Basically, this season looks like a big mess, but in the juiciest way possible. Season 6 of Orange Is the New Black premieres on Netflix July 27.