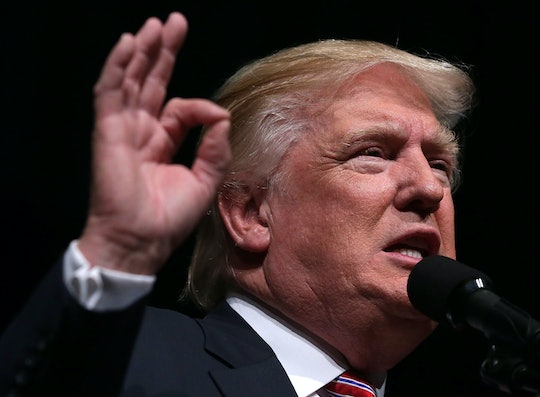 What Is The No First Use Nuclear Pledge & Does Donald Trump Really Want To Break It?

Joe Scarborough, host of MSNBC's Morning Joe program, revealed on Wednesday that Donald Trump had allegedly asked an international foreign policy expert why the United States could not use nuclear weapons several months ago — not once, not twice, but three times. Scarborough told the show's panel, which included former CIA director Michael Hayden, that Trump had reportedly asked the adviser why the United States could not use its arsenal of nuclear weapons as a measure of national security against potential foreign enemies. Scarborough did not name the alleged source and the Trump campaign did not immediately return a request for comment. It is a terrifying reality, however, that a man who allegedly does not understand America's pledge against using nuclear weapons as a deterrent is possibly one election away from the Oval Office. For all intents and purposes, it seems as though Trump doesn't understand the No First Use policy, and — even more concerning — may plan on breaking that pledge if elected to the White House in November.

Trump, of course, has publicly flip-flopped his stance on nuclear weapons throughout his campaign, stating both that it should be the "absolute last step" and that he would "never" rule out actually using them. But with the latest report, it seems he may have reportedly firmed up his resolve to break the First Use pledge no matter what.

No First Use (NFU) is a foreign policy in which a country with nuclear weapons pledges not to use its arsenal unless first attacked by another nuclear power. China, India, and North Korea have taken the NFU pledge. The remaining nuclear powers, including the United Kingdom, France, Israel, Pakistan, Russia, and the United States have pledged to only use nuclear weapons defensively but still reserve the right to strike first in case of conflict.

The U.S. Nuclear Posture Review, however, firmly states that "the fundamental role of U.S. nuclear weapons, which will continue as long as nuclear weapons exist, is to deter nuclear attacks on the United States, our allies, and partners" and that it's in our countries' best interest that the "65-year record of nuclear non-use be extended forever." Trump, it seems, is allegedly not interested in that extension.

Hayden explained on Morning Joe that the United State's nuclear weapons system is "designed for speed and decisiveness. It's not designed to debate the decision", making the reality of a President with a serious lack of understanding of NFU even more harrowing. The United States, as well as other nuclear powers, have based their nuclear strategy on the theory of Mutually Assured Destruction (MAD), which Trump does not seem to understand. MAD essentially proves that the use of nuclear weapons by two or more countries would cause complete devastation for everybody involved and shows that simply the threat of using these types of weapons against an enemy will deter the enemy from using the weapons themselves. This policy, where America does not use or threaten use of it's nuclear arsenal, has worked for the past six decades.

In an angry, lengthy rant on Wednesday, John Noonan, a former missile combat crew commander and national security advisor to Jeb Bush and Mitt Romney, took to Twitter to explain why Trump's alleged questioning of the United States' adherence to NFU and MAD is so dangerous:

There are... a lot of bad actors out there who have nukes. They are restrained only by our ability to instantly lay waste to them. The nuke triad, which Trump doesn't have a clue about, has been the single greatest contributor to global peace for decades. You heard me. I don't know if Scarborough is telling whole truth here. Anonymous sources suck. BUT... if he is... buckle the hell up.

Because Trump would be undoing 6 decades of proven deterrence theory. The purpose of nukes is that they are never used. Trump disagrees? This would be the single greatest strategic shift in US national security in decades. In a Trump Presidency, our foreign policy would be this. "Leave our alliances, fall back on a nuclear first use policy." Does he understand just how F'ing dangerous that is?

No First Strike has been the key factor in keeping not just the United States safe from nuclear weapons, but the whole world. President Obama has even reportedly looked into the possibility of removing the United States' reserved right to strike first under conflict. Having a president who does not believe in or abide by NFU would be a dramatic shift in foreign policy with potentially devastating consequences.

Whatever your political leanings, everybody should keep this mind when heading to the polls in November.