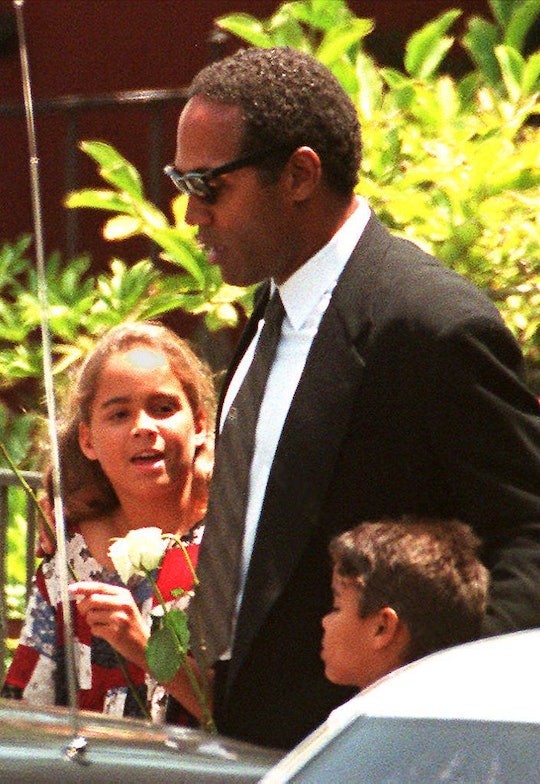 What Is The O.J. Simpson Run? The Athlete Went Down In History

The title of Jeffrey Toobin's book The Run of His Life, the book the series The People vs. O.J. Simpson was inspired by, could easily refer to two incidents in O.J. Simpson's life. The most obvious is Simpson's flight down the highway in a white Ford Bronco, but the other harkens back to his days as a running back for the Buffalo Bills. Simpson was made famous by his runs on the field; he was the first person to break the two thousand yard mark in one season, and he set more than one record. But what became known as the famous O.J. Simpson run?

Running seems to be Simpson's talent. Though he excelled as a running back in college, his professional career didn't start off particularly well until the team realized that his strength was in running. He began to improve, rushing for over a thousand yards in his 1972 season and then over two thousand in 1973, making twelve touchdowns. For the next few years he continued to impress, even winning the NFL rushing title four times. However, he's probably the most famous for a game against the Detroit Lions on Thanksgiving in 1976. He ran for 273 yards and scored two touchdowns – a record for the time.

Watching video of his games proves his skill on the field, even to eyes untrained in the art of football (i.e., mine). It didn't seem like anyone could catch him. When he retired from football after eleven years playing the game, he had over eleven thousand yards to his name, falling just a thousand or so short of beating the record set by Jim Brown years before, though Simpson had broken plenty of other records while playing. Eventually all that running began to wear on his body and injury pushed him to retirement.

As with many famed athletes who go on to be implicated in major crimes, fans of Simpson's football career had to reconcile that with the accusations he was standing trial for. Simpson had built an image over the years of a sports hero, spinning his football prowess into a relatively successful acting career. Public perception of him was so positive that many people refused to believe he could be capable of the violent murders he stood trial for, though public opinion has shifted in the wake of his acquittal in 1995.

However skilled Simpson was as a football player, whenever anyone hears a mention of his running, their first thought is much more likely to be of that Ford Bronco than any games Simpson played.

More Like This
20 Impactful Documentaries To Stream During Black History Month & Beyond
20 Incredible Movies To Watch With Your Family During Black History Month & Beyond
Barbie Honors Aviator “Queen” Bessie Coleman In Their Inspiring Women Line
Marie Kondo Gives Up Tidying Post-Kids, Sparking Joy For Moms Everywhere
What Parents Are Talking About — Delivered Straight To Your Inbox