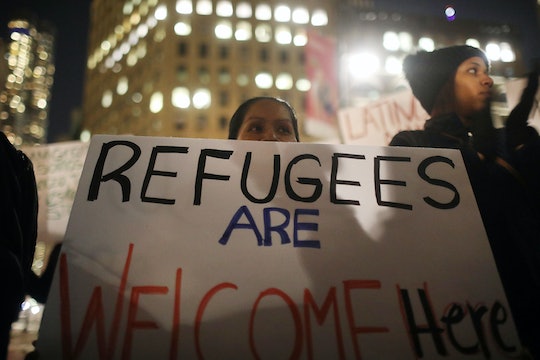 The Path To Citizenship Is Long & Costly

For the past few weeks, the reported immigration raids all over the nation have been a cause for concern — for a very good reason. ICE agents have been arresting undocumented immigrants, instilling fear in those who are just trying to live in the United States. But the path to citizenship for these immigrants is not as easy as one may think. In the aftermath of these raids, and as they continue to happen, people have been wondering what is the path to citizenship — and how can we change this process if it is not as efficient as it could be?

According to Mother Jones, over 680 immigrants were arrested last week in over 12 states. This is in light of the Associated Press' memo — which was denied by the White House — which stated that the Trump administration was proposing to mobilize the National Guard to round up unauthorized immigrants, according to CBS News. The White House press secretary denied this report, but the threat still stands — and according to Mother Jones, ICE is "casting a wider net." Unfortunately, the path to citizenship for these immigrants is not easy — its a lengthy, confusing process that could use reform.

Most immigrants obtain United States citizenship through naturalization — or according to the U.S. Citizenship and Immigration Services, the process where a foreign citizen is granted United States citizenship by "fulfilling the requirements established by congress in the Immigration and Nationality Act." The requirements required by congress are lengthy — and many might not even get that far. In order to qualify for naturalization, immigrants need to be a permanent resident (green card holder) for at least five years, have been a permanent resident for three years or more and married to a U.S. citizen, or qualify through the military. Even if an immigrant has had a green card for five years, they have even more requirements to qualify for citizenship — such as "being a person of good moral character."

The Application and Interview Process

The Oath of Allegiance

Once the applicant is granted citizenship, they must take an oath, where they acknowledge their rights and responsibilities as an American citizen. By doing this, these immigrants must agree to honor the constitution and pledge their allegiance to being a citizen of the United States.

The Problem With This Process

In addition to difficulties obtaining a green card and the potential cost of becoming a U.S. citizen there are more problems that applicants face — such as language barriers or the amount of time it takes to fill out the application and go through the whole process. According to Citizen Path, applications are often denied due to financial problems, requirements that make applicants stay in the U.S. for extended periods of time, and if applicants have a criminal history — all of which can be issues that even natural born citizens face.

How It Can Be Changed

According to PolitiFact, former President Obama had promised to support a system where undocumented immigrants who are in "good standing" could be given the opportunity to become citizens — but that was never manifested in Congress or Senate. Despite the difficulty to be reviewed by legislators, many Americans are in support of a clear path for citizenship. A Gallup poll from this past July (before Trump was elected) found that an overwhelming 84 percent of Americans are in favor of a path for citizenship for illegal immigrants. During her campaign for presidency, Hillary Clinton promised to make the pathway to citizenship and obtaining a green card smoother — in part by fixing the visa backlog and waiving naturalization application fees. But those policies will never be manifested in Trump's administration. While it is a stretch, electing officials who promise to streamline this citizenship process and make it easier on families is really the only way to fix the problems.

The path to United States citizenship is not easy — it is an often long, costly, and intricate process. The only way for any sort of change to be made lies in the hands of the government.