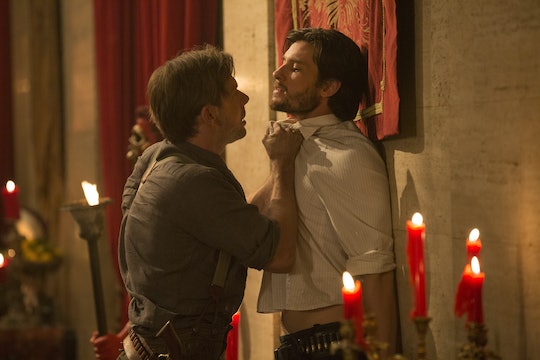 What Is The Photo Logan Gave William On 'Westworld'? It Might Be Familiar To Viewers

One of the most prominent Westworld theories holds that we're unknowingly seeing two separate timelines – one following the Man in Black's quest for the maze, and one illuminating his own earlier "backstory" as William, palling around with Dolores. Viewers have picked up on apparent hints and clues backing up this idea, but so far, nothing concrete has made itself apparent. That all changed on tonight's episode. We saw Logan hand William a very particular photo – and it seemed to be one that we've seen before. But what is the photo Logan gave William on Westworld?

On "The Well-Tempered Clavier," William began to really "break bad," in earnest. Originally a "white hat" when he arrived in the park, William's burgeoning love for Dolores seems to have led him towards some very dark behavior in hopes of protecting her. In the closing moments of the last episode, we saw Logan and the men accompanying him track down William and Dolores and kidnap them.

Where we picked up on tonight's episode, Logan was more interested in torturing William and "proving" to him that Dolores wasn't actually real. William's future brother-in-law was both horrified and bemused to see the "number" that Westworld (and Dolores) had done to William's mind. In an attempt to break William's growing involvement with Dolores, Logan gave him a photo – a photo of Logan's sister and William's fiancee. But eagle-eyed viewers noticed something very familiar about that picture.

Specifically, we've all seen it before – in the very first episode of the season.

On "The Original," Dolores' first father (Peter Abernathy 1.0) was functioning normally. The two had their same, pleasant morning conversation without fail, until one day Peter didn't respond as expected. He'd found a photo in the field and, as viewers soon discovered, the photo triggered some kind of malfunction in Abernathy's core code, leading him to be decommissioned. That photo, we now know, was the same photo Logan gave to William – a photo of William's fiancee. Interestingly, this is an exact theory that a few sharp-minded Redditors have called before, just a few weeks into the season.

This is majorly significant for a few reasons. For one, it seems to be a point towards the likelihood of the multiple time periods theory. If William and Logan were in the thirty-years-prior timeline, it follows that the photo, now in William's possession, could have been left in Abernathy's field at some point in the future. Because we'd already seen the photo in Abernathy's hands, that all but confirms that, chronologically, the events we saw with Abernathy malfunctioning in the pilot happened after (possibly years after) the events we saw with William, Logan, and Dolores on the most recent episode.

On top of all that, the photo evidence seems to also suggest that the William = Man in Black theory is true. In the opening scene of the pilot, before Abernathy malfunctioned, we met the Man in Black for the first time – when he came to Dolores' farm to apparently brutalize her. While it's yet to be confirmed explicitly, it makes all the sense in the world that the Man in Black could have left behind the photo of his fiancee hoping to trigger some kind of malfunction (or self-awareness) in the hosts.

Whatever the case, I hope the finale will put the two-timelines theory to rest, either confirming or denying it once and for all. There's so much else going on in Westworld to be bothered with tracking potential time jumps.