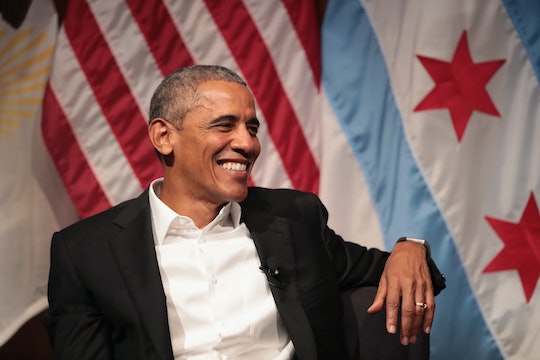 On Sunday, President Barack Obama will be stepping back into the limelight, at least for a few hours. Obama will be receiving the Profile in Courage award from the Kennedy Foundation on Sunday night, making him only the third president in history to be recognized by the foundation for his courage in the face of political adversity. But what exactly is the Profile in Courage award?

It's been around for less than two decades, but according to the Kennedy Foundation, it's the "preeminent award for elected officials and public servants" around the world. It was created in 1989 by members of President John F. Kennedy's family as a way to pay homage to his legacy and honor courage in politics. While Obama will take the 2017 award, past recipients have included Presidents George H.W. Bush and Gerald Ford, Egyptian protest leader Wael Ghonim, Arizona Rep. Gabrielle Giffords, and Liberian activist Leymah Gbowee.

The award was inspired by Kennedy's book, Profiles in Courage, which documented the achievements of eight American senators that put their careers on the line by standing up for what was right.

"President Kennedy called on a new generation of Americans to give their talents to the service of the country," Caroline Kennedy, President Kennedy's daughter and ambassador to Japan during the Obama administration, said in a statement. "With exceptional dignity and courage, President Obama has carried that torch into our own time, providing young people of all backgrounds with an example they can emulate in their own lives."

Obama recently came back into the spotlight following some time off after President Donald Trump's inauguration, delivering a speech at the University of Chicago and lining up several private and public speeches — both at home and abroad — in the coming months.

"It’s been more than half a century since John F. Kennedy asked us to cast aside our narrow self-interest and take up the chase of a greater ambition: our collective capacity to do big things, especially when it’s hard," Obama said of the Profile in Courage award in a statement. "It was a call to citizenship as true as the words of our founding and a conviction that helped guide me to public service as a younger man – a belief in the possibilities of our democracy and the power of what we, the people, can do together."