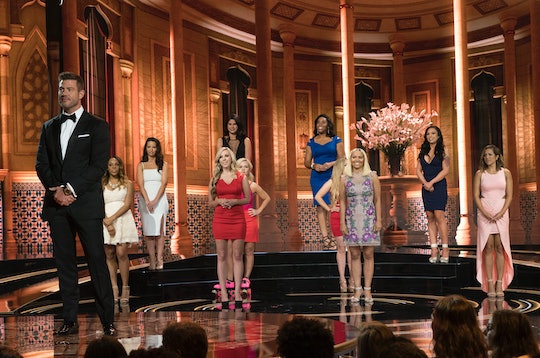 'The Proposal' Sounds Like The Guilty Pleasure You Need This Summer

Just when you thought that dating competition shows were going out of style, the Bachelor Nation creators have come up with a brand new one and it's just as ridiculous as all the shows before it. This summer, The Bachelor creator Mike Fleiss is bringing The Proposal to ABC and it sounds like something everyone is going to love to hate-watch. So what is The Proposal and will it be as successful as our other faves?

The show almost sounds like a spoof of some late-night dating show from the 1990s, which is both a pro and con, in my humble opinion. It's hosted by former NFL quarterback and former Bachelor (because of course), Jesse Palmer, and is sort of like a pageant, which will obviously be totally cringeworthy.

There's a mystery suitor named Mike, who is a police officer from Bakersfield, California, but his identity is hidden from the contestants and the audience. He will judge the contestants by making them answer pressing questions about love and romance and make them compete in a "beachwear round," which is just a fancy way of saying that there will be a swimsuit competition. The contestants will also meet the mystery suitor's family and try to woo them in a lightening round version of hometown dates, it seems.

There's a secret panel of judges, including the mystery suitor, that will decide who gets eliminated and who can stick around for more trivia and tests. At the very end, the idea is that the mystery suitor and the final contestant get engaged, despite the fact that they've never seen each other's faces until that very moment.

It's going to be hard to miss, whether you plan on watching it or not. The show is slated to premiere on Monday, June 18, right smack in the middle of Becca Kufrin's quest for love and just before the Bachelor In Paradise premiere, which Mike Fleiss confirmed on Twitter is still happening. So be prepared to be inundated with lots of sparkly dresses, cheesy one-liners, and an insistence on traditional gender roles this summer.

Making guilty pleasure reality television is what Fleiss was born to do, for better or worse. He told Forbes back in 2009 that dating shows was where the viewers were, saying:

I think it's easier to make these shows now than it was 10 years ago. Now everybody wants to do them — big stars want to be in the game because they know it's the most relevant and evasive media out there today. If you look at the magazine and entertainment shows, it's almost all they talk about. It's probably good news for the Johnny Depps and Leonardo DiCaprios of the world because the media is more interested in The Bachelor than who those guys are dating.

I mean, that was a decade ago and it's still sort of true, so you have to hand it to the guy for sticking with it.. That doesn't mean that the creator, and shows that include a "beachwear round" during primetime hours, aren't problematic AF even in 2018. In the same 2009 interview, Fleiss was very open about how his shows pit genders stereotypes against each other. He added:

Well, at least you know what you're getting into, right? If you love (or love to hate) anything about Bachelor Nation, The Proposal should definitely be added to your watchlist this summer. If only to see what the "beachwear round" really ends up looking like.