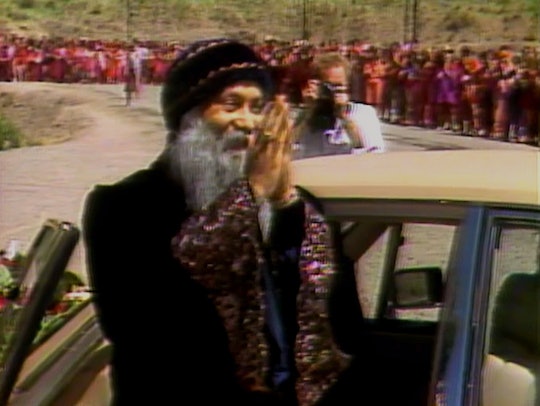 Netflix's Wild Wild Country revisits a story that some members of its audience might have forgotten. It tackles the growing conflict between two very different groups in Oregon in the early 1980s: the conservative townspeople of Antelope and a spiritual sect who called themselves the Rajneeshees. But what is the Rajneesh movement?

The group was formed under the leadership of Bhagwan Shree Rajneesh, an Indian guru and mystic. Before taking the journey to Oregon, Shree Rajneesh had been living in Mumbai and working as a philosophy professor. He became especially popular with Westerners, according to The Oregonian, but after authorities in India began to investigate the smuggling and tax fraud his group was engaged in, they decided to emigrate elsewhere. They purchased a ranch on a stretch of land in Oregon with the intention of setting up a peaceful utopia.

The Rajneeshees stood out in their all-red outfits and beaded necklaces with pictures of their silent leader on them. Despite the fact that the followers were unpaid for their labor, they were noted for having acquired 93 Rolls-Royces for Shree Rajneesh in total. That inconsistency in how they lived would only intensify as tensions grew with the residents of Oregon, and the supposedly peaceful group began carrying AK-47s and poisoning the local populace as part of an election rigging scheme.

Initially, it seems the Rajneeshees planned to operate the ranch as intended, or at least that's what they said. The Oregonian reported that Shree Rajneesh's organizer and spokeswoman Ma Anand Sheela told Wasco County officials that they weren't even a religious sect. They were just there to "celebrate life and laughter" as "simple farmers." But with their vast numbers, they soon set out to start their own city.

The Washington Post discussed all the changes the Rajneeshees were able to bring about on their large ranch in less than four years of living there. They created paved roads and a man-made lake, built housing and a hotel as well as a disco and a shopping mall. There were also farming projects, a vineyard, and attempts to recycle and restore the land. But the surrounding residents felt their lives were being encroached on by the Rajneeshees, and the Rajneeshees in turn believed they were in danger.

Those beliefs were not unfounded, because they did receive death threats and a hotel they owned in Portland was bombed in 1983, as reported by the L.A. Times. In 1985, a follower of Rajneesh named Krishna Deva told The Washington Post, "They'd like us to kiss their feet as they lead us to the gas chambers... But we're not going to let them step on our rights... We're prepared to deal with whatever would come."

The trailer for Wild Wild Country details the discomfort of the local residents had with the Rajneeshees. The people of Antelope considered the guru's influence evil and Satanic. They began to form vigilante groups to threaten the sect, which in turn caused the Rajneeshees to arm themselves and later take even more drastic measures. While former members of the Rajneesh movement speak to their compassionate intentions in the trailer, as well as their leader's seemingly noble agenda of "raising the consciousness of humanity," their actions began to reflect the opposite.

In an attempt to gain more power in local politics, the Rajneeshees planted salmonella in various restaurants so that people would be too sick to go to the polls. Seven hundred people were poisoned at minimum and it is considered the largest bioterrorism attack in the United States. There was something darker lurking beneath the supposedly peaceful facade of the Rajneesh movement, and Wild Wild Country will explore that.