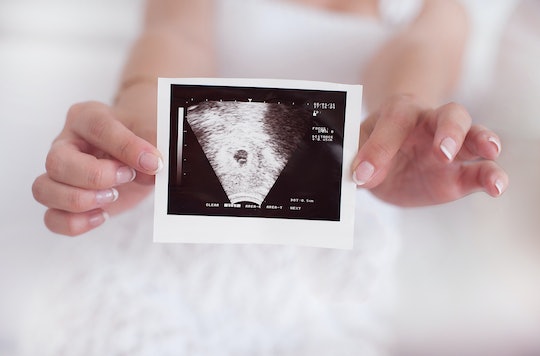 This Theory Claims You Can Find Your Baby's Sex At 6 Weeks, But Is It Legit?

When you are trying to conceive or when you miss your period, the first question that pops into your mind is “Am I pregnant?”. Once your pregnancy is confirmed, the all consuming question becomes “Is it a boy or a girl?”. Traditionally, you are told to wait until your 5-month ultrasound so that doctors can clearly see your baby's sex, but there is a technique called the Ramzi Method, which follows a theory that claims to reveal a baby’s sex much sooner than five months. So what is the Ramzi Theory, and does it really work?

According to Baby Center, the Ramzi Theory is not a medically proven method, and may even be a hoax that people have fallen for. The article explained that the theory popped up in a research paper on ObGyn.net in 2011, and was attributed to a doctor named Dr. Saad Ramzi Ismail. Apparently Dr. Ismail's credentials are unverifiable, along with the claims of his research paper. Unfortunately, just because it was published on the website doesn't mean it's legit. ObGyn.net can publish research that is not peer-reviewed by other scientists or medical experts, mentioned Baby Center, so there is no way to make sure this research is scientifically valid.

As for the Ramzi Theory itself, Baby Center explained, the research paper published on ObGyn.net claimed that in a case study of over 5,000 women, looking at the placement of the placenta in a 6-week ultrasound could determine whether the sex of the baby would be male or female. The paper claimed that when the placenta forms on the right side of your uterus, your baby will likely be a boy, and if it forms on the left, it will probably be a girl.

While you may find websites that claim the Ramzi Theory’s reliability as a method to guess gender, the fact is that there is no proof to those claims. After perusing various pregnancy blogs and forums, I found that many women found the opposite of what the Ramzi Method claimed, so it’s credibility is definitely questionable from a non-medical standpoint.

But it’s not just the lack of statistics or evidence that make the Ramzi Theory less credible. Baby Center mentioned that in a 2010 study in the journal Ultrasound in Obstetrics & Gynecology, Australian researchers tested the theory and found no relationship between the location of the placenta and the sex of the baby. In fact, even major medical organizations, like the American Congress of Obstetricians and Gynecologists (ACOG), don’t recognize it as a legitimate method of distinguishing the sex of the fetus.

If you really want to know the sex of your baby, remember that the most accurate way is by checking their chromosomes. Healthline explained that between 11 and 14 weeks of pregnancy, you can have chorionic villi sampling (CVS), or at 16 weeks you can have an amniocentesis performed to check the baby’s chromosomes. The article further noted that you can also get a non-invasive blood test from 7 to 10 weeks, but you’ll get more accurate results after week 10. You can also wait for the ultrasound you get at your five month checkup, which can pick up and reveal your child's genitals to the sonographer.

At the end of the day, if you really want to try the Ramzi method to find out your baby’s sex, you absolutely can. Just know that the results may or may not be accurate, considering there’s a 50/50 chance it will be right or wrong. As long as you are using the method in fun, and not basing any major life decisions on it, go ahead and map that placenta on your ultrasound.