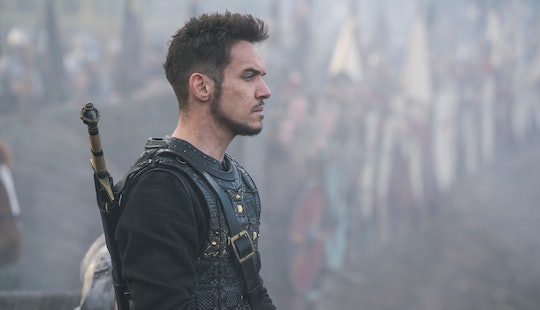 Heahmund Has A Vision Of Hell On 'Vikings'

The fifteenth episode of Vikings' fifth season is called "Hell," and there's a good reason for that. In the promo, Bishop Heahmund reveals that he was given a terrifying vision of a hell that might await him. Glimpses of his dream reveal typical fire and blood, as well as the silhouettes of strange monsters: men with the heads of wolves or bulls. It seems the show will be dipping into some mythology, but what is the real Viking legend of hell? It might inform the show's interpretation.

Historian Hilda Ellis Davidson stated in The Lost Beliefs of Northern Europe that there was "no consistent picture in Norse literary tradition of the fate of the dead." Instead there were several underworld realms: Odin's idyllic Valhalla, the resting place of the chosen few; a watery afterlife for those who perished at sea; and the realm of the goddess of death Hel, which was variously called "Hel" or "Helheim." For the sake of clarity, I'll refer to the goddess as Hel and the location as Helheim from here on out.

The website Norse Mythology for Smart People described Helheim as the most common underworld realm. Most Vikings would go there after death to continue doing the same things they did in life: eat, drink, fight, sleep, etc. Unlike the Christian hell, a place of fire and brimstone presided over by Satan, Helheim was not intrinsically negative.

The underworld appears to be something of a mixed bag in Norse mythology. It's difficult to determine why certain people went to certain parts of it; though being a celebrated warrior might have landed some in Valhalla, the same wasn't true for every fighter. Per the site Norse Mythology for Smart People, it's "ultimately impossible to establish a neat set of criteria for how the dead end up where they do," and it's equally tough to work out the boundaries of each specific realm.

However, citing the work of thirteenth-century Icelandic scholar Snorri Sturluson and medieval Danish historian Saxo Grammaticus, the site states that Helheim was located underground and up north. That made it especially frigid. According to historian Michael Drout, who appeared on the History Channel's Devils and Hell, "If you're living on the edge of the North Sea, in the pre-industrial age, cold is way worse than warm."

That's quite a difference from the fiery fate that Heahmund envisions, but the fact that he's a bishop could be informing his ideas of the afterlife. Perhaps he's conflating two versions of hell, or only referring to the Christian one. The monsters he envisioned don't seem to have any real connection to Norse mythology either. There is a wolf god named Fenrir who is Hel's brother, but he doesn't appear to reside in her realm. As for a Norse minotaur, your guess is as good as mine; I can't locate where that idea of Heahmund's might have come from.

The Viking legend of hell differs greatly from the Western world's accepted idea of an afterlife, but it seems the vision Heahmund experiences on Vikings might blend the two.