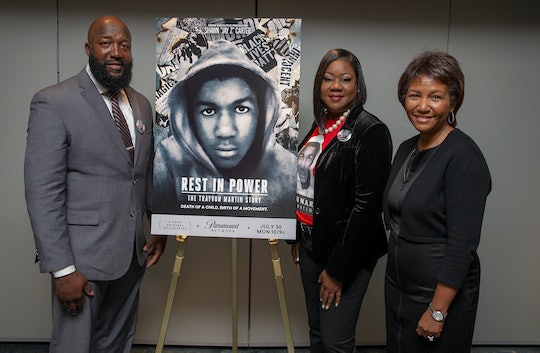 'Rest In Power' Revisits The Tragic Story That Sparked A Movement

An new documentary titled Rest in Power is set to premiere tonight on Paramount Network and BET, and it's reignited discussions about what many people consider to be the spark that began the Black Lives Matter movement. So what exactly is the Rest in Power documentary about? It tells the story of the life and death of Trayvon Martin.

On February 26, 2012, Martin, a 17-year-old black boy, was shot and killed by George Zimmerman, a 28-year-old white Hispanic man. Following the shooting, Zimmerman was not arrested at first due to the "Stand Your Ground" statute in Florida. However, after thousands of people protested around the country, calling for Zimmerman's arrest and a full investigation into the incident, Zimmerman was later charged with murder. In the end though, the "Stand Your Ground" law led to Zimmerman's acquittal, shocking many people around the country.

The new documentary is based on the book by the same name that was written by Martin's parents, Tracy Martin and Sybrina Fulton, which was published in January 2017. Though the series will focus on the shooting, investigation, and acquittal, Jenner Furst, who directed the docuseries with Julia Willoughby Nason, explained at the Tribeca Film Festival that it's about more than just that.

"The telegraphing in that opening montage [of the documentary], that is to tell viewers that this is not a story about yesterday," Furst said. "This is a story about today and tomorrow, and the country that we're living in now. It's our belief that Trayvon Martin was a fork in the road, and was an alarm clock for many Americans, in that there were positive things that came about as a result of that—a consciousness, a new civil rights movement—and there was blowback. And we're currently living in the blowback."

The series, which contains six one-hour long episodes, first had it's world premiere at the Tribeca Film Festival in April and the first episode was screened during the American Black Film Festival in June. It was executive produced by Jay Z who enlisted Furst and Nason to take on the project. The pair previously worked together on the Peabody Award-winning documentary, Time: The Kalief Browder Story, about the high school student who was incarcerated for three years without being convicted of a crime. He ended his life in 2015.

Rest In Power features never-before-seen footage and audio recordings including court depositions of Martin's family members, home videos and interviews, 911 calls, and surveillance footage from Zimmerman's arrest. According to the Los Angeles Times, more than 100 people were interviewed, and the filmmakers employed an investigative team that included a New York Times journalist for the series.

"We're very thorough," Furst told the LA Times. "Our approach to storytelling is based on characters. In the end, people don't learn from statistics and headlines, they learn from human connection." Zimmerman was also reached out to for the documentary, but he did not respond to their requests. However, he has recently been in the news with connection to the documentary.

Zimmerman has allegedly been charged with stalking by Private Investigator Dennis Warren in Florida. According to The Blast, Zimmerman found the P.I. to find out who was in the Rest in Power documentary but those people were worried that they'd be in danger if Zimmerman found out their information. Warren then filed an objection to a recent subpoena by Zimmerman, demanding all the documents. Warren claims several of the people he contacted are alleged victims of Zimmerman. "They do not want him to know what they said about him or have any contact with him," Warren said. Zimmerman has pled not guilty to the charge.