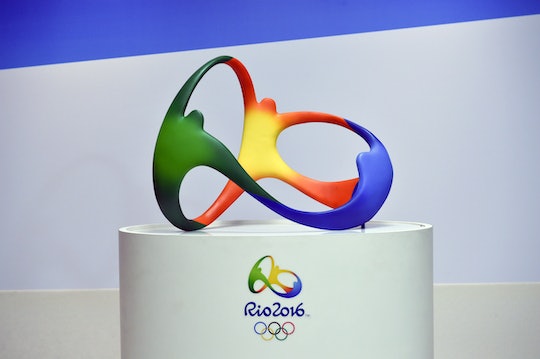 What Is The Rio Olympics Logo? It's A Tribute To Those Who Call Rio Home

The 2016 Olympic Games in Rio de Janeiro, Brazil kicks off Friday, but the event itself has not been without controversy. Brazil has had a difficult time since winning the Olympic bid in 2009 thanks to political and economic instability, and other unforeseen obstacles, like the outbreak of the Zika virus. So suffice it to say, this year's summer Olympics will not have gone off without a hitch. Even the Olympic logo itself has received criticism (though almost every Olympic logo in existence has courted its fair share of naysayers). What is the Rio Olympics logo? Depending on who you ask, it's either a warm, joyful tribute to the Cariocas — the citizens of Rio — or a questionable design that may bear a striking resemblance to an already-existing logo for a U.S.-based nonprofit organization (oops).

The Rio Olympic logo was designed by Fred Gelli, the founder of the Brazilian design firm, Tátil, which beat out almost 140 others to become the official logo designer of the Olympics. In an interview with designboom, Gelli explained that the Rio logo is inspired by two main concepts — the physical symbol of people hugging to represent both the human spirit of the Olympics and that of the Cariocas, mixed with an ode to Rio's landscape by echoing the shape of the Sugarloaf mountain, which is the city's most famous panoramic view. The final design was one of about 50 that the firm considered, and Gelli said he wanted to ensure that the final submission was "a human logo," and one that everybody could understand:

We employed the entire team...to work together on its development. We were constantly asking our employees — from the IT team to the receptionists — to give their feedback on the concepts, and we put away an idea when we felt that those people were not understanding it. It’s not a logo conceived only for designers or for a private company, but for everybody on this planet.

The colors of the Rio Olympic logo were also a deliberate choice, according to Creative Bloq. Gelli explained that the three colors — yellow, blue and green — represent the Rio landscape of sun, water, and forest, and that it was important that the feel of the city was reflected in the final design. One thing that Gelli said surprised him though after the logo was unveiled though? The number of people who saw the word 'Rio' spelled out in the shape itself. He told Creative Bloq,

Many people started to see the word 'Rio' in the logo. The major of Rio said to us: 'Oh, great! You put Rio in the symbol. We said, er…[laughs]. That's something we never imagined.

According to Creative Review, who translated parts of a case study Tátil posted online in Portuguese, the most important aspect was that the logo reflected the local culture:

We were born from a mixture of ethnicities. We warmly embrace all ethnicities, faiths and generations. We share our sky, our ocean and our happiness with the world. This human warmth, which is part of the Carioca nature and the Olympic spirit, is shaped by the exuberant nature of a city that inspires us to live passionately and carefree, and loves to share and engage with others.

As positive as the logo and its message seems though, Tátil came under fire after the logo's unveiling, thanks to its similarity to that of the Colorado-based Telluride Foundation, according to USA Today. Gelli responded by saying that he had never seen the Telluride Foundation's logo, learning about it only after the public began making comparisons. Although Gelli argued that Tátil did attempt to ensure they hadn't inadvertently copied other pre-existing designs before finalizing their own, he admitted, "for some reason, we missed that one."

During the official celebration for the new logo, which occurred on New Year's Eve, organizers explained, according to USA Today, that the logo represents "contagious energy, harmonious diversity, exuberant nature and the Olympic spirit" — all themes that show up again and again whenever a city hosts the Olympics. While the city of Rio certainly might have a lot of other issues on its plate right now, the arrival of the Olympics will, perhaps, at least provide some sense of hope and unity, as the city hosts athletes and tourists from all around the world, in support of sport and the Olympic Games.